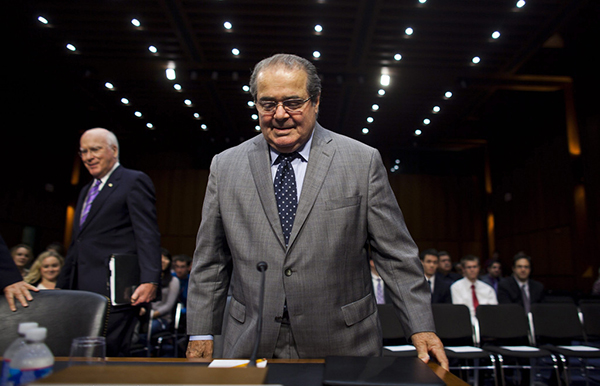 When United States Supreme Court Justice Antonin Scalia passed away last Saturday, a battle over the authority to appoint his successor rapidly ensued. Only two hours after word of Scalia’s death went out, President Obama stated that he would nominate a new justice, but the Republican leader of the Senate demanded that the nomination be delayed until next year when a new president takes office. Because Republicans currently control the Senate, Obama’s ability to force a nomination will be blocked.

There are a total of nine justices on the U.S. Supreme Court. Before Scalia passed away, both the liberal and conservative factions counted four justices each, with one other justice being more neutral. If Obama appoints a new liberal justice to fill the vacancy left by Scalia, then the “ideological balance” of America’s high court will be broken. U.S. Supreme Court justices serve life terms, and their configuration influences the political trajectory of American society to a certain degree.

All justices are nominated by the president and confirmed by the Senate. Presidents always nominate people who share their political outlook or even common politics. Thus, the Supreme Court tends to have more members of either the liberal or conservative faction depending on which of the parties, Democratic or Republican, holds power the longest. The recent 4-1-4 makeup of the court reflected the even balance of power of the two parties seen over the long term.

The Supreme Court has great authority in the United States. Its 2000 decision led to the electoral victory of President George W. Bush and the loss of candidate Al Gore, despite Gore having received more popular votes. Scalia was a standard bearer of the conservative faction, which opposes abortion and homosexuality and supports the death penalty; he also strongly opposed Obama’s health care reform plan. The effect on the partisan struggle in the United States of replacing Scalia with a justice who holds opposing views is clear.

Historically, in the early days of the United States, when it was setting up the mechanisms for the separation of powers, the country did not account for partisan politics because at the time, the federal structure of the U.S. had not been solidified, and the country was largely divided into “federalists” and “anti-federalists.” The U.S. Constitution’s system of government has eroded due to the emergence of partisan politics, but no new “governing party” has ever reformed this system because by the time a party gains power, it has put up with the system for so long and now finally has an opportunity to influence the appointment of Supreme Court justices. So, it “puts politics in command” and decides to simply use its new authority for the time being.

Of the nine justices on the current court, including Scalia, two were nominated by Ronald Reagan, two by Bill Clinton, three by the younger George W. Bush, and two by Obama. From this, it is clear how the Democratic and Republican parties have “shared the spoils” of the system and have both lacked any impetus for reform.

Naturally, partisan politics have permeated American society to an even greater degree than those on the outside typically realize; even though the American public has its complaints, most of the elite benefit from the partisan system. The two parties and their supporters attack each other, but they generally remain silent on structural issues. Even if they give such issues any consideration, it’s always light and insubstantial.

The nomination of Supreme Court justices is not, after all, the most conspicuous reflection of U.S. partisan politics; even if Americans oppose partisan politics, they never really think to start correcting them here. Nevertheless, the two parties’ rapid descent into bickering after Scalia’s sudden passing is still quite dramatic. Rules and customs are set by people, and there is an element of deliberateness to how long politics can exert influence. The battle over filling Scalia’s vacancy shows how the United States — this Western “example of judicial independence” — has been unable to rise above convention on this matter.