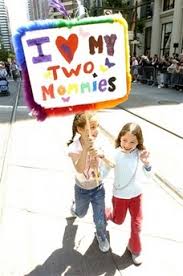 Children love their parents. That’s a given. It’s what American photographer Gabriela Herman’s project “The Kids” is about. But she’s photographed solely children who, like herself, grew up in the LGBT community. She frankly admits that she doesn’t know her biological parents but was raised by two fathers. “Sometimes I wonder where I came from and then other times it just kinda disappears in terms of its importance.”* She’s tried for a long time to grasp this deep thought.

In short, the whole underlying message is this: everything’s okay, kids, we’re moving forward without stopping; three moms are better than one! There are a lot of honest confessions there that make one shudder. “I was raised by my mom and her different partners … I feel like I was raised by a lot of different women.” Or here’s the son of two mothers: “I had less trouble with two moms and more issues with finding myself.” The confession of a man who has two mothers and a father: “I was surrounded by lesbians all the time. I have a vague memory of listening to pop music on the radio and just assuming that the person singing was probably singing to a person of the same gender.” And so on.

The project is built on just such mini-stories and is accompanied by really beautiful photos. You know, I know this ploy very well; if you use various filters, good makeup, a decent camera and shoot it all against a wooded background or a beautiful urban landscape, even Chikatilo and Basayev themselves would look at a photograph of you with affection and tenderness.** So it’s been many years since I’ve fallen for these tricks. I’ve learned to discern the insidious essence and meaning behind plenty of these.

When I was a teenager, many of my friends’ parents, for a variety of different reasons, didn’t go through with a divorce; one because of the children, in order to keep the appearance of a family; another’s mother dutifully carried the cross of being the wife of an alcoholic and didn’t abandon the father; another, banally enough, because of money, as at the end of the ’80s and the start of the ’90s, renting an apartment was considered a luxury. We were about 10 or 11 years old, we visited each other’s homes, and many of my friends still lived in communal apartments on Vasilevsky Island. We saw a variety of families. At my one friend’s place, there were two refrigerators in the kitchen: one was the mom’s, the other the dad’s. Yeah. And neither of the parents poked around in the other’s refrigerator. But the girl could take food from either. Another friend’s parents didn’t sleep together, so the mother slept in the same bed as the girl for a few years. Until she was about 16, it seems. The mother didn’t want to sleep with her husband, but in the two-room apartment where the brother also lived, there simply wasn’t enough room for beds and sofas. Well, and as for stories about drunken brawls in communal apartments, you can just imagine. Some were forced to sleep on the floor in the hallway. And we, being teenagers, thought it was all normal. No one was surprised at it.

The American teenagers admit that they didn’t faint when they found out their dad was gay and their mom was sleeping with the lady next door. As a matter of fact, neither did my friends roll around on the floor in inescapable sorrow when they found out their mom and dad were finally going to get a divorce. Teenagers understand what’s going on in adult life. They watch us not with their eyes, but with their souls. Children are finely tuned to the world of adults. Like cats who sense an earthquake and hurry away, so children sense coming changes based on our tone, smiles and distractedness. Especially if the changes are coming upon their child-like heads. So it’s very hard to surprise a teenager with any of the antics their parents throw at them. But then, many years later, all these boys and girls wind up in a psychologist’s office with one big problem. Having become adults, they don’t know how to live in a loving family. And I see how my friends’ families are now falling apart, in spite of all their fancy training. In their subconscious, which Grandpa Freud can’t always reach, lie all these childhood stories, these rather wild family scenarios. “That’s what my mom used to do.”

That’s the scariest thing. And that’s the most dangerous thing in this American woman’s lovely material about the LGBT community. All this exists in our life. Do we have to pretend like we don’t know about it? No, we don’t. But it’s just not necessary to popularize it.

I have a close friend, my best friend, who moved to the U.S. in the mid-’90s and really criticized me for not being tolerant of Chechen terrorists. She called them “separatists” and sent me tons of links to news sites about all sorts of atrocities by our special forces. All this happened right up until she came to her office window and saw an airplane circle around and then crash into the neighboring tower, until people then began to jump from it, until everything caught fire and the end of the world began. She didn’t see the second plane because she’s nevertheless a Russian and quickly realized she had to get away. The rest of the Americans at her finance corporation continued to drink tea and work for some time. They likewise didn’t believe all this would affect them.

*Translator’s note: This quote, attributed to photographer Gabriela Herman, is in actuality a quote from one of her subjects featured in “The Kids.” In general, the quotations appearing in the Russian-language article contain omissions or are otherwise inexact. The translation presented here aims to preserve these inaccuracies while using as much of the original wording as possible.