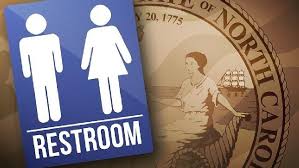 The discrimination against transsexuals in the bathrooms of North Carolina has sparked the outrage of businesses and artists alike.

In 1985, the existence of Sun City, an apartheid-era South African resort in which the cream of the elite white ruling crop enjoyed luxury vacations and performances from A-list stars, came to the attention of E Street Band guitarist Steve van Zandt. Van Zandt decided that to play there was to become an accomplice to apartheid, and so, he began the process of convincing his friends to mount a boycott. Out of the campaign came the song “Sun City,” a collaboration among Bruce Springsteen, U2, Peter Gabriel, Keith Richards, Bonnie Raitt, and more than 50 other artists. “You can’t buy me, I don’t care what you pay, Don’t ask me Sun City, Because I ain’t gonna play,” some of the verses said.

Springsteen, van Zandt, and the rest of the E Street Band did not play in South Africa until 2014. This Sunday, they were set to do the same in Greensboro, North Carolina. However, this Friday, the group published a statement on its website stating that they were canceling the concert, and that they would provide a refund to those who had bought tickets. What was the reason behind this? It was another boycott for another type of discrimination. North Carolina has just passed House Bill 2, otherwise known as the “Bathroom Bill,” which forces everyone to use the bathroom that corresponds to their sex at birth. This may seem like common sense, but in reality, it represents an attack on transsexuals, a group that often suffers discrimination in either of the two bathrooms. Last week, PayPal canceled plans to open a new global operations center in Charlotte in protest of the new law, and Hollywood has threatened to avoid filming in North Carolina during the making of any future productions. The governors of Vermont, New York and Washington state have banned politicians and civil servants from taking publicly funded trips to North Carolina, which in practice represents a near severing of ties.

“This political correctness has gone amok,” said North Carolina Gov. Pat McCrory, who considers his new law to simply be common sense. Perhaps he is unaware of cities like West Hollywood, the gay capital in the south of California, where not only can you not discriminate against transsexuals, but you cannot discriminate, full stop. “Oh no, political correctness? That excuse that progressives use to try and get us to abandon our values,” some Republican leaders appear to be saying. The bathroom stalls have become the new battleground in the war against social advances, and the enemy is political correctness. In their eyes, to allow discrimination on religious grounds is to defend religious freedom; racism is simply freedom of expression; to label all Mexicans rapists and drug dealers is a legitimate point in a debate on the issues with immigration; and proposing a ban on all Muslims entering the U.S. in order to fight extremism is a valid argument. Make no bones about it. What Pat McCrory has said is a disgrace and it is, in fact, he who is running amok with his own brand of “political correctness.”