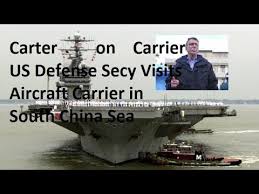 This is not the first time that Carter has taken action to put pressure on China. Just five months ago, he made a high-profile visit to the aircraft carrier USS Theodore Roosevelt as it was patrolling near the South China Sea. During this visit he also declared his intent to deploy the “most advanced” equipment in the Asia-Pacific in response to the problems in the South China Sea.

In reality, over the course of last year, America’s reaction to the South China Sea problem has been to put on several farcical performances.

To “show one’s muscle” is part of a drama’s grand finale. America dispatched the destroyer USS Lassen on an illegal course into the nearby sea area of China’s Nansha (Spratly) Islands. There were B-52 bombers that used the method of “straying off course” to fly near China’s islands in the South China Sea. By adding Carter’s cameo appearance, the U.S. military is demonstrating its aggressive side.

“A show of intimacy” is an act of showmanship that has been around for a long time. When looking at Carter’s visit, several Western media sources deliberately focused on specific details, emphasizing that Carter and the Philippine defense secretary flew to the aircraft carrier together in a V-22 Osprey transport aircraft. Prior to this, as a part of his visit to the Philippines, Carter proclaimed that America had already begun joint patrols with the Philippines in the South China Sea. In a short time, collaboration between the U.S. and the Philippines had reached new heights.

“Speaking out for morality and justice” is another key tool being used on the world stage. On one hand the U.S. military threatens China with a show of force, while at the same time the military talks about the so-called respect for “freedom of navigation,” demanding that China respect “international law,” imploring us to use peaceful means to resolve disputes. America has gone to great lengths to dress itself up as a “moral exemplar.”

Although the United States has elaborately set up its act, in reality it is only pursuing its own self-interest.

First, America’s direct goal lies in interfering with China’s actions in the South China Sea. Even though the United States says that it is not taking sides in the South China Sea sovereignty disputes, its real actions show that it is secretly helping others. As to the provocative behavior of the Philippines and other countries, America is accustomed to looking the other way. Yet, when it comes to China’s legitimate actions, the U.S. goes out of its way to obstruct and interfere. China’s construction of civilian facilities on the Nansha (Spratly) Islands is meant to better serve the countries along the coast of these islands, in addition to vessels of all nations that pass through the area. America has been irresponsible in the remarks it has made, going so far as to raise concerns over a lighthouse constructed there by China. It is abundantly clear that the U.S. is attempting to contain China.

Secondly, from America’s point of view, the South China Sea is important to its position in the Asia-Pacific. In recent years, the United States has experienced a relative decline in power, not only being powerless to satisfy the requests of its allies in the region, but also requiring its allies in several regions to assume part of the burden, coordinating with them on the implementation of strategy. In these circumstances, America has hyped up the threat posed by China, emboldened the Philippines by taking advantage of opportunities that arise to establish credibility, and leveraging the importance of its alliance system. Prior to this, the United States had repeatedly encouraged its regional allies to patrol in the South China Sea, but Japan, Australia, and other countries took a cautious position. America had no other choice than to pull in the Philippines to “keep up appearances.” Everyone knows that Philippine naval and air power are weak, and its entry into America’s activities will not be of any real use. Nonetheless, the United States continues to expect that it will be able to use this as a means to push its allies into forming a more united front on the South China Sea issue, hedging against the effects to its leadership in the region caused by the rise of China.

Yet America’s purchasing power will be unable to restrain China. China’s plan in the South China Sea has already begun to bear fruit, now we need only to continue to implement it step by step.

Compared to the feverish activity of America’s military, China’s military is calm and collected. According to information from the website of the Ministry of National Defense, in recent days, Vice Chairman of the Central Military Commission Fan Changlong paid a visit to the Nansha (Spratly) Islands, greeting the troops and contractors there, while also gaining an understanding of the status of construction on the islands in the South China Sea. China released three signals here. First, countries have no right to speak rashly on activities taken within the realm of China’s sovereignty. Second, China is strident in its commitment to peaceful development, and its willingness to keep the peace in the South China Sea. At the same time, China is dedicated to providing more public goods there. The third and final point was that China is determined, and has the capability, to protect its sovereign rights. China is not afraid of power, and is even less afraid of hollow statements. Other countries ought not to misinterpret China’s viewpoints.

When Carter boarded the aircraft carrier, he proclaimed that America would continue to “keep peace and stability in the South China Sea.”* We advise the United States to keep its actions in line with its words, so that it may avoid saying one thing, and doing another.

*Editor’s note: This quoted language, although accurately translated, could not be independently verified.