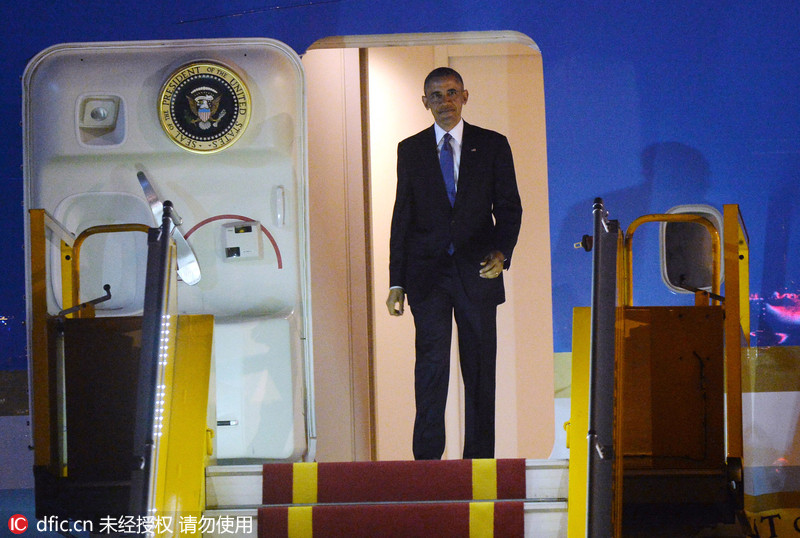 On May 23, U.S. President Barack Obama visited Vietnam. U.S.-Vietnam relations have received much attention, as they are regarded as a sensitive, uncertain factor in the South China Sea situation, with myriad different opinions about the future.

With last year marking the 40th anniversary of the end of the Vietnam War, as well as the 20th anniversary of U.S.-Vietnam diplomatic relations, Obama’s visit came a bit late. Obama waiting until this year to visit indicates that Vietnam is not the most important country to the United States, and that relations can be postponed — but it also shows the importance of Vietnam as a country that Obama must visit before leaving office. Obama’s three-day stay in Vietnam is not short. It’s predicted that the Trans-Pacific Partnership will be discussed by the leaders in Hanoi, and the South China Sea will most likely come up. Vietnam hopes the U.S. will completely end its arms embargo, but this is certainly unattainable. In addition, the American public hopes Obama will bring up human rights issues while in Hanoi.

The South China Sea issue has brought the U.S. and Vietnam closer together, but their ideologies endlessly push them apart. The TPP has helped the U.S. to “reform” Vietnam, while Vietnam is on high alert against a “peaceful evolution.” Overall, U.S.-Vietnam relations appear to be full of contradictions.

Vietnam hopes that U.S. power will counterbalance China in the South China Sea, as it uses the U.S. as a chip in its own territorial games with China, while also seeking to develop its own economy by strengthening U.S.-Vietnamese relations. If Vietnam could be as close as the Philippines and Singapore are to the United States, and the Americans could use Vietnamese bases like those in the other two countries, a new context could be created for the U.S.’s “Asia-Pacific rebalance.”

However, the concerns from both sides are insurmountable. The American view of human rights in Vietnam is similar to its view of the Chinese. Washington has in its hand a list of more than 100 people who have been “illegally imprisoned” by Vietnam because the country considers them to be political dissidents. American society has a strong prejudice against the communist regime in Vietnam, especially from a large group of Vietnamese expatriates who fought during the war and later fled to the U.S., individuals who are much more interested in subverting the current Vietnamese regime than in the South China Sea.

With Internet technology in Vietnam falling significantly behind that of China, Vietnamese society naturally receives new Western social media like Facebook. As a country that has historically been a Western colony, Vietnam understands the challenges that globalization brings. Although the Communist Party of Vietnam has, to a certain degree, opened up elections, it is at the same time extremely aware of the leaders of the intellectual class who are against the party. Unlike Liu Xiao Bo, Pu Zhi Qiang and others from China, the group of political dissidents in Vietnam is not prominent, and to date intense public events have been few. In most situations, officials are meticulous about ensuring their basic influence in and control over society.

Hanoi cannot be the same type of ally as the Philippines is with the United States. Vietnam’s attitude toward the U.S. has been cautious and heavily guarded. As a result, Vietnam cannot prioritize the pursuit of U.S.-Vietnam relations as a national objective.

China is Vietnam’s main rival in the territorial disputes in the South China Sea, but at the same time China is considered by the mainstream elites in Hanoi to be the country’s stable political pillar. The revolution in Vietnam is almost a replica of Chinese economic reform. The CPV values its relations with the Communist Party of China, with both sides seeing special significance in developing party relations between the two countries. It is clear to Hanoi that, despite the CPV’s introduction of some political reforms, the changes are far from sufficient based on Western standards. Vietnam is too small, and is thus unable to form an ideologically independent entity. CPV derives a considerable part of its ruling legitimacy from the long-term stability and prosperity of socialist China.

Correctly put, Vietnam is not opposing China’s strategy on purpose, but rather the conflict over the South China Sea is the only obstacle to their bilateral relations. The two countries have already demarcated their land borders, with the Beibu Gulf demarcation now completed. Vietnam simultaneously claimed sovereignty over the Xisha Islands (Paracel Islands) and the Nansha Islands (Spratly Islands), but the Xisha Islands have long been under China’s total control, so Vietnam’s claim was completely meaningless. Creating a conflict over the Xisha Islands is more of a strategy in fighting for legitimacy over the Nansha Islands. Moreover, Vietnam’s oil and natural gas exploration in the South China Sea is currently being operated outside the nine-dash line. The dispute between the two countries is not long, but its intensity is high.

Although Vietnam values the development of relations with both China and the United States, when the situation in the South China Sea becomes tense Vietnam will side with Washington. When the South China Sea is calm while Chinese political pressure increases, Vietnam will side with Beijing. The Vietnamese people always emphasize that they are “not the Philippines” to the Chinese, hoping that the Chinese will not get them confused.

Vietnam is certainly not the Philippines — both Beijing and Washington are clear about this point. The great powers in the Asia-Pacific region now value Vietnam, with Hanoi feeling both flattered and tangled. Vietnam hopes to maximize its own interests, but also knows its actions must be executed carefully.