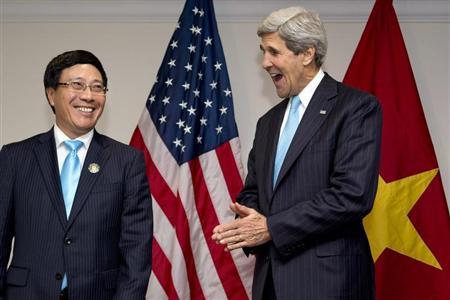 On May 23, President Barack Obama announced that a decades-long ban on the export of armaments to Vietnam would be lifted in its entirety. Why has he chosen this moment to do so, and what does he believe he will gain?

First, there is the fact that the United States’ “Asia-Pacific rebalance” strategy has garnered little in the way of approbation from the international community since its inception. In Vietnam, however, a state that has both outstanding disputes with and considerable wariness toward China, the United States must feel that it has found a suitable “junior partner” to work with.

Second, on the domestic side, how to rally the economy has always been a pivotal issue for the two major U.S. political parties competing for votes in the general presidential election. Although Obama himself is soon to be free of the presidential yoke, he must first put his house in order, and the political interests of the Democratic Party demand that he produce results on economic matters. As the most profitable commodity among all globally-traded goods, military armaments present an obvious short-term solution to spur job creation.

Third, lifting the arms embargo will allow the United States to put the kibosh on Russia’s tentative forays into improving ties with Southeast Asia. At the recent Association of Southeast Asian Nations summit in Sochi, Russia made a series of moves designed to strengthen its position in the region, with arms sales to Vietnam being one of the most widely discussed issues. Obama’s decision to lift the embargo was clearly designed to present Russia with stiff competition in that regard.

Moreover, in recent years, Vietnam has been propelled by Chinese economic development, and it now enjoys an extremely fair economic outlook and state finances that have improved year by year to fill its coffers. But as Vietnam now looks toward China, both facing the very real South China Sea dispute and still bearing the scars of punishment dealt from Beijing for the misguided policies of years past, Hanoi sees shoring up the military as the only means for Vietnam to put itself at ease.

In the past, Vietnam’s weapons and equipment were primarily sourced from the Soviet Union, and later Russia. However, having only one supplier can prove unreliable, as in the space of a moment a state can easily find itself the sacrificial lamb in a match of wills between world powers. Accordingly, opening a secondary supply channel with the United States would clearly spell a significant increase in Vietnam’s security coefficient, for if conflict breaks out between it and China, Beijing will very likely call on Russia to cut off the provision of weapons and related components to Vietnam. And as the strategic leanings of the United States and Russia are, of course, vastly disparate, it would be practically impossible for China to deny Vietnam both sources of weapons simultaneously.

The author is a commentator on military affairs.