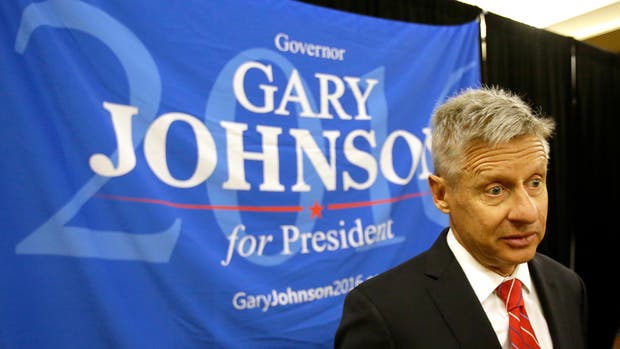 Yesterday Libertarian Gary Johnson became his party’s candidate; he looks to be the surprise in a presidential election without clear favorites.

The ex-Governor of New Mexico, Gary Johnson, was elected yesterday in the Libertarian Party Convention as their leader and candidate for the United States presidential election, in which this alternative party could obtain a record number of votes.

The attention in the primaries has been focused on millionaire Donald Trump, on the Republican side; and on the ex-Secretary of State, Hillary Clinton, on the Democratic side. Nevertheless, this third party can find various voters in this atypical election for the United States: There are many citizens that do not trust the magnate nor the spouse of ex-President Bill Clinton.

In the middle of this panorama, yesterday Johnson obtained more than 50 percent of the votes in the convention of the [Libertarian] Party that was held this weekend in Orlando, Fl.

The Libertarian Party, ideologically conservative and anarchist, could be significant in these elections if they can position themselves as an alternative to Democrats disenchanted with the elite that Clinton represents and to the Republicans disenchanted with Trump.

Gary Johnson was also a candidate in the 2012 elections, in which he received 1 percent of the votes, the first time that the Libertarian Party registered more than one million votes.

Johnson is polling with 10 percent of voting intention, according to a poll published this week by Morning Consult. And if they get 15 percent, they would have the right to participate in the presidential debates, which in this country is usually only between Republicans and Democrats.

The Libertarians advocate for minimal federal government, with respect to the end of individualism and give the option to choose in matters such as abortion or the legalization of marijuana.

This discourse could also procure Libertarian votes from the left that Sen. Bernie Sanders, the rival of Hillary Clinton who advocates for the end of politics catering to the elite and the end of millionaire donations, represents.

The entrance of a third party into the U.S. presidential election, which is traditionally between two parties, could introduce an even greater element of uncertainty within the election and diminish support for both nominees.