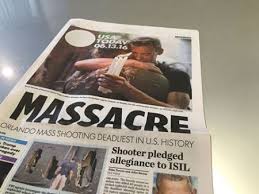 Fresh carnage in the U.S. against a nightclub in Orlando, Florida. On Sunday, the reckoning was horrible, with 50 dead and dozens wounded. This is a massacre unheard of in the United States. The killer was quickly identified as Omar Mateen. Was he a “lone wolf” or was he on a mission ordered by others? The claim yesterday by the Islamic State that the shooting was against “a sodomite nightclub” was perhaps just an opportunity for the Islamic State group to claim that they could strike at any time in the United States. In effect, the claim talking about “our brother Omar Mateen, one of the caliphate’s soldiers,” may just be an opportunity by the terrorist group to seize an opportunity against the context of violence in the United States.

Even though it looks like the bloodiest incident, the Orlando shooting is not the first, and surely not the last, and is in line with a large number of shootings, mass murders and less frequently, terrorist attacks. Some 355 shootings were recorded in the United States in 2015, over 1,000 in a three-year period. So, in a country where it is legal to possess weapons, death can strike at any second, be it through a person with a mental health issue, a psychopath or a terrorist. Indeed, the most recent shooting in the U.S. which claimed lives (14 deaths at the beginning of Dec. 2015) was the San Bernardino, California, shooting perpetrated by a couple of Pakistani descent, one of whom was born in the United States. Incidentally, at the time the Islamic State group rejoiced after the massacre without claiming responsibility. So, the claim by the Islamic State group about the June 12 carnage introduces a deviation, without it being established that the terrorist group had a hand in it. It is customary for the terrorist group to claim credit for lone wolf actions, and calling Omar Mateen “a soldier of the caliphate” in the United States says a lot about the Islamic State group’s tactic of trying to get people to believe that they are present everywhere in the world, including in the United States.

Thus, anyone, as long as he or she has committed some sort of spectacular act such as the one in Orlando, could potentially be named a “soldier of the caliphate.” Once again, it is the jihadi group that wins without paying the price. Sure, it remains to be seen if there is a real link between the Orlando killer and the Islamic State group, something the investigation will probably establish.

Nonetheless, it remains that in this case, by finding that Mateen belonged to the terrorist group, the U.S. would carry a clear responsibility in the events impacting its people. In its policy of global domination, the U.S. has brought destruction to the four corners of the world, feeding conflict everywhere it thinks its interests are at stake. The wars in Afghanistan, in Iraq, in Syria, in Somalia are, more or less, its doing, giving rise to frustration in plundered and marginalized people, thus inspiring martyrdom via suicide missions resulting in the U.S. being cast in the role of the victim. Recurrent shootings such as those in Orlando and San Bernardino could be linked to terrorism, but they could also possibly be linked to U.S. paranoia. In the first scenario, where the shootings are linked to terrorism, the U.S. only has itself to blame, as it was the first to use Islam as a domination tool in recomposing the Muslim world. If the Orlando crime is linked to terrorism, it will only have a boomerang effect and hit the U.S. in the gut.