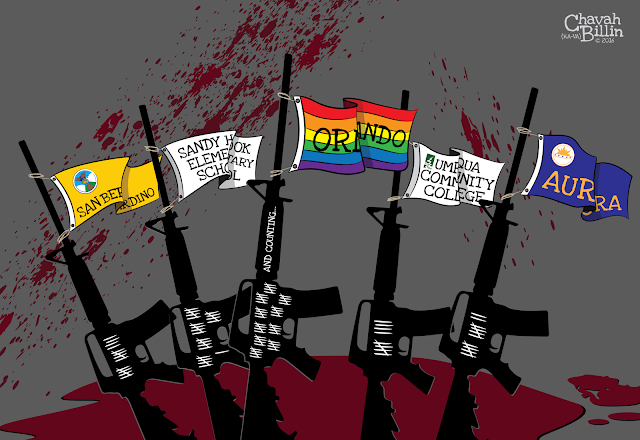 Although he announced his allegiance to the Islamic State group on the phone during his attack at Pulse, the gay nightclub in Orlando, the information leaked in the past week on Omar Mateen, his work and personal history indicates different roots to his violence and points to a phenomenon that has, unfortunately, become all too familiar in the United States: mass murder. This raises a number of questions regarding the growing culture of violence in the United States itself, the bolstering of the war on terror and its various manifestations, and a masculinity mobilized by the fear of others deemed to be an existential threat. It also reopens the debate about the problematic relationship between weapons and the right to bear them. The right to purchase and carry weapons is becoming one of the strongest expressions of individual liberty and conservative nationalist identity. The United States leads the world in the rate of individual ownership of weapons; civilians in America own 270 million weapons. This system is perpetuated by the strongest lobby in Washington.

It will seem easy to rush to a superficial understanding and put Mateen in the Islamic State or radical Islam box, but regardless of his name and his 11th-hour pledge of allegiance, he belongs to a deeply entrenched (and rather shocking) history of American violence committed against citizens in public places. And minorities, especially gays, are often a preferred target in these attacks. It is worth mentioning that a third of mass murders committed between 1966 and 2012 in the whole world took place in America, even though the population of America makes up just 5 percent of the world’s population.

Most American media outlets were quick to announce that the Orlando attack was the bloodiest in U.S. history. But this is not at all true and there are many examples belying that claim. For example, the terrorist bombing of a federal building in Oklahoma in 1995 killed 168 people. Perhaps the ethnicity of the perpetrator — who was executed in 2011* — explains why [that event] tends not to be considered a case of domestic terrorism. Timothy McVeigh was a white man, and not a Muslim. He participated in the Gulf War in 1991 and killed a lot of Iraqi soldiers, witnessing some of them being buried alive in the desert and dogs eating their corpses.

Mateen was not far from the culture of war. He had worked nine years with the infamous G4S, one of the largest global companies offering security services and mercenary [services], which became increasingly profitable after 9/11 and the occupation of Iraq, when the U.S. Army employed private companies. Everyone remembers the company Blackwater and the crimes they committed there. G4S is the same kind of company. Among the contracts the company has acquired is managing the prison at Guantanamo. It also has contracts with prisons in Israeli occupied territories. There’s a long list of crimes committed by G4S employees, including killing detainees and children. The company also has contracts and a presence in Florida, where it runs 30 juvenile detention centers, and where a number of crimes committed by G4S employees against minors have been documented.

This is the “work culture” (the term currently in use) of the company where Mateen worked; Mateen first and foremost belongs to the American culture of violence.