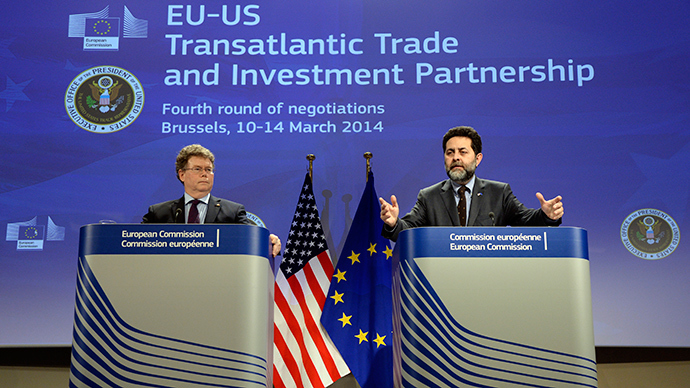 The EU’s free trade treaty with the U.S. appears to have broken down for the time being. A reboot could also be a big opportunity.

Nobody is going to seriously question the advantages of the European domestic market today. The benefits are too apparent for enterprises as well as consumers. But the TTIP negotiations between the EU and the U.S. have hit a dead end.

The resistance among the populace is so great, not only in Austria, but also in Germany and France, that politicians see no alternative to hitting the brakes harder than previously. Why that is and why that is good has to do with the dark sides of globalization that have been kept from view for too long.

The ability of the American corporate behemoth Apple to pay only 1 percent in taxes on profits earned in Europe since 2003 abetted by the Irish government is a classic symptom of an undesired development that must be corrected. Politics have neglected to distribute the gains of globalization in a socially acceptable manner. Simply put: It is easy for the wealthy to multiply their wealth. Conversely, there are too many globalization losers, who are not able to keep up with global competition or who have lost their jobs due to site relocation.

What made a social market economy – or, better yet, an eco-social market economy – into a model for success over the course of the last two decades has been increasingly devalued in the grand rush to liberalize. If the TTIP debates are currently focused on chlorinated chickens and arbitration courts for companies that are to essentially eliminate existing jurisdiction, then those are just two classic examples of how the march in the wrong direction can be made tangible.

Free trade, yes, but we have to intensively and, above all, openly discuss the framework conditions for it. Therefore, the temporary moratorium of the TTIP negotiations between the EU Commission and the U.S. would also be an opportunity: An opportunity for a new beginning of the discussions, which are currently stuck and emotionally charged, in order to have prospects and success. The topic is too important to leave to the populists.