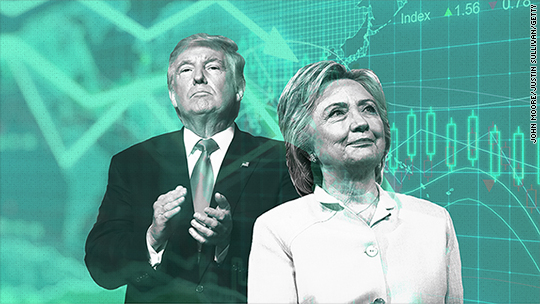 The American economy is healthier than its reputation. A crazy president could scare the living daylights out of it.

Afghanistan, Iraq, and Americans being tired of war, helped Barack Obama win the presidency in 2008. Another factor should not be ignored: the economy. The year before it had suffered a complete crash, now known as the financial crisis.

Obama’s eight years in the White House have been characterized by a constant economic upsurge. However, you would not believe that from listening to the propaganda in the current election. The Republican Donald Trump has been ranting and raving about the danger of an economic collapse, and Hillary Clinton has faced tough challenges from an apocalyptic left wing before managing to secure the Democratic nomination.

The economic stimulus plans were already in progress under George W. Bush, and helped ensure that the recession never turned into a depression such as the one seen in the 1930s. Everything did not work out perfectly, and some of the money was ultimately wasted. However, the financial system was saved, and the auto industry didn’t die. The taxpayers in the end did not have to face the cost of the rescue actions.

The budget deficit, on the other hand, did remain substantial for a long time. This created a bitter struggle between Obama and his opponents in Congress. On a number of occasions, the Republicans threatened to drive the country into bankruptcy by refusing to raise debt levels, a crazy tactic with potentially disastrous consequences. The president on the other hand did not want to deal with the explosive way in which costs from the social welfare reforms were going up. After his re-election in 2012 there was a truce leading to both tax increases and cost cuts.

The nation’s financial crisis is no longer talked about. The recovery has been slow but steady. The Federal Reserve has done its part by holding down interest rates, even if you may wonder whether it will ever get the chance to put rates up again before the bad times return.

Times are not so bad right now. The growth isn’t spectacular, but internal spending levels are stable. Fifteen million jobs have been created since 2010. Unemployment is only at 5 percent, and even if many gave up looking for work following the financial crisis, the number of people in employment is growing again. Average incomes are now, finally, also rising. In 2015 incomes rose by as much as 5 percent. A stronger workforce, higher salaries, and low inflation are the reasons behind this.

Despite those facts, pessimism is still reigning supreme. Sure, average salaries are still slightly below where they were before the financial crisis, but the downbeat mood is more to do with how people are feeling. Opinion polls suggest that people are about as happy with their finances as they were during the Reagan era in the 1980s. Still, two-thirds of Americans believe that the U.S. is heading in the wrong direction.

One of the reasons used to explain this is that both the rewards and the costs of the economic swings of the last few years have been distributed rather unevenly. This is true both financially and geographically. In areas where a lot of manufacturing jobs have disappeared it is harder to be content than in Silicon Valley or in Manhattan. Doubtless there are losers who have not had enough support to be able to bounce back. The U.S. spends less money on initiatives supporting the labor market than other Western countries.

The influence of the president on the American economy is always overestimated. Congress makes the decisions on budgets and money, but the White House gets criticized if the economy slows down. Now that Obama is coming to the end of his mandate, his popularity is on the rise. This could be a reflection of the real economy, but also a fear of what is to come from a horrible election.

Obama’s instinct has usually been that the state should do more. He has pretended that raising the taxes for the rich is the answer for all issues. However, in last week’s edition of The Economist he gives a balanced picture of what has happened during his eight years in office, and things that have gone wrong. “Capitalism has been the greatest creator of wealth that the world has ever seen,” Obama wrote. Profit and incentives are important, but when the market fails what is broken must be fixed. He defends free trade and globalization, criticizing populists both on the right and the left for jeopardizing all of the progress made.

The president indicates four points where improvements must be made: Productivity needs to increase again, and we must battle inequality, increase job opportunities, and protect against a possible financial meltdown.

However, during the election campaign all serious discussions have been swallowed up by Donald Trump’s insults and scandals. Who can debate political reforms with a man who boasts about how he grabs women between the legs because he is a star?

His fans imagine that Trump’s experience as a property tycoon makes him qualified to fix the whole U.S. economy. However, there are several concerns about his business, including a reputation for being dishonest and bad at counting. He has been surfing a wave of misery and fear, but that does not make his policies (or rather lack of them) credible.

Trump says that the middle class will prosper, but his main argument is for big tax cuts for the rich as well as businesses. Costs for everything from defense to schools will increase, the sum of which looks like an enormous budget deficit. Growth is projected to increase to 4 percent. A pure illusion, not least because of the demographic. He promises to create 25 million new jobs, way more than the number of people available to take them. In addition, he is planning to deport all illegal immigrants, immigrants the country cannot do without, and stop further immigration.

Clinton is missing the big picture rather than the details. Some of the proposals, like investments in infrastructure and parental leave, are sensible. The richest in society can probably cope with a substantially bigger tax bill, but companies burdened with higher bills cannot necessarily be expected to create more jobs. Another problem is that she is not trying to reform but to complicate the tax system further, a system that is already riddled with possible deductions and loopholes.

The escalating costs for pensions and Medicare, the medical care program for the old, are no longer discussed. Both Clinton and Trump are sticking to the story that nothing needs to be done.

The protectionism may be the worst part of the whole election. Trump is threatening to pull out of NAFTA and other free trade agreements, as well as to substantially raise the tolls on goods from China and Mexico. The whole world should bow down to the USA’s conditions, but a full-scale trade war is much more likely. American consumers will suffer through higher prices. Jobs lost abroad are not likely to return, not even if Trump bans robots and scientific progress.

Even Clinton has, against her better judgment, chosen the bumpy road of trade barriers. Trade unions and left-wing Democrats demanded this in the primaries, and Trump has pushed her further in this direction. These days she is against TPP, and if it is just election propaganda, a change of heart will be a very difficult maneuver to negotiate at a later stage.

The United States’ economy has its difficulties. Luckily it is still a pretty flexible animal with lots of innovators, entrepreneurs, and a large internal workforce. Trump would be a really dangerous choice, not just because his policies don’t add up, but because of the uncertainty he would spread across the world. The Clinton recipe hardly promises to deliver eternal health. It is still preferable to a guaranteed heart attack.