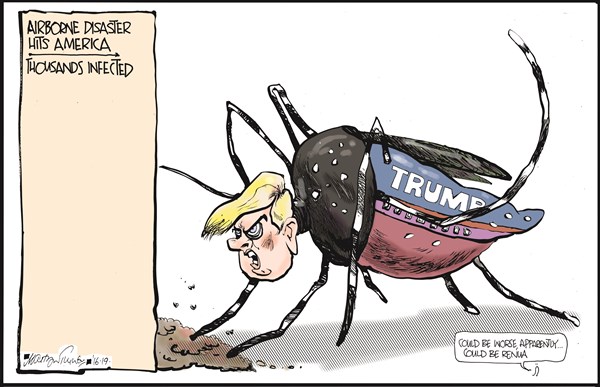 An Algerian virus? For the first time in the history of the United States, a candidate for the White House, Donald Trump, is accusing his country of organizing rigged elections. Trump is crying to anyone who will listen that, if he loses to Hillary Clinton, it will be because of voter fraud. His own party is asking him to provide evidence. The best evidence, according to him, is his decline in popularity in polls. It’s the argument of all sore losers. So full of himself, he doesn’t see all of the flaws he has while aspiring to such a high position.

For many influential American politicians (Democrat and Republican), Trump would put the United States and the world in danger if, by some misfortune, he gets elected. His ignorance of major international issues, his inappropriate use of language – like his threat to imprison Clinton if he’s elected or even to break ties early with France due to the fact that “France is no longer France” – all make him an atypical candidate. His irresponsible remarks about his neighboring country, Mexico, can be quoted as well.

His morality is also being called into question for his treatment of women. It would take too long to depict his character in a few lines. Remember, he thinks that if he doesn’t end up winning the election it will be due to electoral fraud. Accordingly, Americans fear the worst if Trump moves into the Oval Office. Their fears are justified because in every country in the world, not everyone can be a political leader and, a fortiori, head of state. A leader must be capable.

And that brings us back home to Algeria, where electoral fraud syndrome is an “old sickness,” and it always takes place, much to our misfortune. All of our candidates up for election at every level blame their failures on fraud. It’s chronic among certain candidates who denounce this fraud even before the election takes place. Instead of asking themselves about the conditions necessary (there are many) to seduce and convince the electorate, instead of asking themselves what means are necessary to control the outcome of the election (it generally is about the might of the party’s machine under the banner with which it presents itself), they instead prefer the position of “victim” to diminish the resulting affront. It’s exactly the same approach that Trump has adopted. As this is the first such case in the history of the United States, we can believe that Trump has come down with the Algerian “virus.” It is an older and very resistant strain, that would persist even if we gave control of the elections to extraterrestrials!