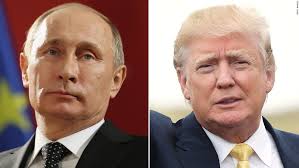 The new U.S. president is not the only one who should be concerned with what Putin has planned for his empire. Europe also remembers when Russia ruled the continent. Everything is possible.

Russia lost an empire and is still in the process of finding itself, internally as well as externally. So what does Vladimir Putin want? Donald Trump, the future master of the White House, will have to deal with this question, and even more so with its consequences, sooner rather than later.

This will not be easy, because it is easier to figure out what Putin does not want than what he actually wants. He was bequeathed an ambiguous history between Europe and Asia, between the lash and enlightenment.

First and foremost, he is a traditionalist: his demeanor and decorum in the Kremlin give this away. He is not a communist of the old breed. He criticizes Lenin and Stalin’s heirs for having ruined Russia. He is painfully aware of the fact that the Soviet Union, despite its size, was not a successful model.

However, he has adopted a few things from the Soviet Union’s secret police and its predecessors. For example, he adopted the “verticality of power,” or the view that the state should run like a Swiss clock, a concept that borders on tragic in a huge country where sentences like “the sky is high and the czar is far” still apply.

The conviction that Russia can only be held together by an iron fist and the secret services is, thus, an heirloom of the past.

Russia and the ‘Curse of Oil’

So, for what will the new administration in Washington have to prepare? Certainly not for a repetition of the Soviet model – “Upper Volta with rockets,” as Helmut Schmidt once put it during one of his visits to Moscow. But also not for weakness, downfall and collapse, like three decades ago when the price of oil slumped, the empire suffered from overextension and the Soviet system slid into chaos.

Russia continues in its roles as the petroleum state and as a raw material supplier. This includes the “curse of oil”: revenue without effort, wealth without modernization, stagnation without self-sustaining growth, and innovation at best a side product from the mighty military-industrial complex.

What, however, remains when the last 100 years since “Red October” have appeared predominantly as a series of disasters? Only the czarist era remains, with all its contradictions; similarities to people who are alive today are not coincidental.

Russia Nearly Was the Master of Europe

Catherine the Great deplored the unfavorable geography of Russia and took it as her right to continuously expand. Due to the absence of natural borders, she was convinced she could only secure her country by acquiring more provinces.

She owed the adjunct of historic greatness to her conquest and appropriation of the Crimean Peninsula through Count Potemkin, who was more than just one of her generals. But whoever owned Crimea overlooked the eastern part of the Mediterranean – Syria, the lower Danube and, first and foremost, the Dardanelles.

Four centuries after the acquisition of the Crimean Peninsula, when Napoleon’s army was defeated and the Congress of Vienna redrew the maps, Russia would have nearly become the master of Europe had the Royal Navy not existed. Czar Alexander I, just like the European middle powers, knew that without Russia’s mass armies, Napoleon would have been in power.

The significance of the Battle of Waterloo in 1815 also lies in the fact that Britain and Prussia were able to change the course of the war and end it without Russian intervention.

The Right To Intervene in Central Europe

However, there remained the problem of complementing the rough crowd from the East and creating a lasting balance after 25 years of war and revolution. In Berlin, the Russians were referred to as “our brute liberators.” A solution was found when the great powers gave the Russian battalions Polish duck as a provision for the trip back East. This resulted in Poland being split up once again, with the lion’s share going to Russia, and the Western provinces to Prussia and Austria.

To hedge the new situation, Russia demanded, and was granted, the right to intervene in Central Europe through the Holy Alliance with Austria and Prussia. When in 1848 the Habsburg dynasty faltered and Hungary rebelled, Russia marched. They also mobilized when Prussia temporarily pretended that Berlin wanted a unified Germany. Russia was the power that kept order in Europe. Europe lived, in the language of the time, “sous l’oeil des Russes.”

Then, however, the czar continued the Ottoman wars and started the “Great Game” against the British in Central Asia. He wanted to have the Dardanelles as well as the Christians in the Ottoman Empire; Russian wards and the vanguard of the Southern expansion of the Russian-orthodox power.

Great Britain sent troops to Crimea in alliance with France and Savoy. The naval harbor of Sevastopol fell. The military catastrophe also had internal effects. The czardom wobbled, farmers became people. The seeds of doubt – reforms and violence – were planted.

The ‘Seminal Catastrophy of Our Century’

The defensive offensive, cultural extension and the duplication of foreign policy and security policy are all part of the long line of Russian politics: the official, serious policies as well as the dubious, subversive ones, have as many faces today as they did back then, even in the digital world.

Since the Crimean defeat, the shift from the old orthodoxy to the new nationalism, in the form of pan-slavism, turned into the new half-revolutionary element. Russia strove to be the “third Rome” in the eyes of its people and the world. During the next Ottoman wars, the czar’s generals targeted access to the Black Sea, Old Great Bulgaria and the Western Balkans. They faced the British Navy, which protected Europe’s balance of power. There was the threat of a war between Russia and the West.

Bismarck hesitated for a long time before he tried to mediate, acting as the “honest broker” to secure peace. The British thanked him poorly and the Russians resented the fact that their grand strategy to expand in the direction of the Mediterranean had failed. “If Berlin holds the keys to the Dardanelles, then we will go get it from there.”* France came to their aid.

Two world wars later, American diplomat and historian George F. Kennan wrote something of an obituary for Bismarck’s system of alliances. He named the dissolution of boundaries, the destruction of the balance of power, wars and revolutions, (which all began in 1878 in the Eastern Mediterranean) the “seminal catastrophy of this century.”

When Donald Trump meets Vladimir Putin in the near future, the two most powerful men in the world will have an agenda of war and peace to discuss, and the world will hold its breath.

History is not lost; sometimes it repeats itself, at least in its basic structures. These structures, however, can reveal hidden truths, flag dangers and act as warnings against hubris.

*Editor’s note: The source of this quotation, which was accurately translated, could not be verified.