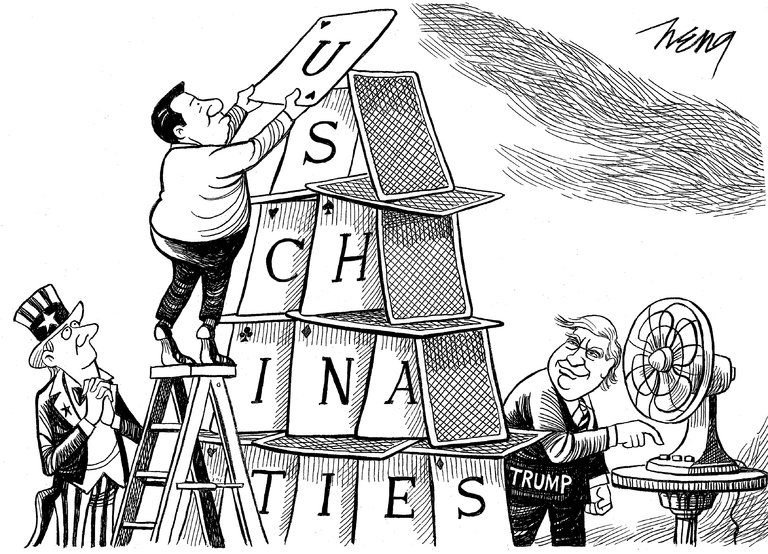 Trump’s comments on the “One China” policy have become a bargaining chip with which he wants China to make concessions on aspects such as trade. The shrewd businessman probably thinks he is being extremely clever, but in reality, this man who has been elected as the next American president and who has never had any experience with the realities of diplomacy between superpowers probably does not understand what he is talking about at all. He overestimates America’s ability to dominate the world and does not see the limitations of its power today.

Within the range of the western Pacific coastal waters off mainland China, China is already extremely powerful. China has never undertaken frontline expansion and has therefore developed the ability to handle any strategic challenge to its close surroundings. China already has enough confidence to wrestle with America – particularly in the Taiwan Strait.

Trump has made a series of remarks overstepping the mark, which demonstrates that he looks down on China. But pride comes before a fall. Trump hasn’t even entered the White House yet and he is already revealing his hand toward China. In firing shots at the “One China” policy, Trump’s strategy is already being put in place before he even takes office.

China must demand the establishment of respect between Trump’s government and the Chinese government. If not, the two countries will be fundamentally unable to deal with one another. Have absolutely no delusions that America will abandon its provocation of China regarding crucial Chinese territories in exchange for a policy of appeasement during Trump’s presidency. China and America need to try and verify each other’s strengths and agree on some kind of level of mutual respect, and only once these core issues have been established will China and the U.S. be able to live together in relative harmony.

In fact, before Trump’s election, America’s strategy toward China demonstrated its lack of patience and the situation was often called “critical.” Urging by American warmongers to contain China’s rapid rise grow ever stronger. Trump’s extreme words and actions should suit the current mood of America’s ultraconservative groups.

China’s core interest region has hardly expanded at all during its development; its control of potential risks with respect to Taiwan and the South China Sea is different from how it was before. China has a full toolbox with which to strike back at Trump’s trade threats, therefore, no matter what conflict should occur between China and the U.S., we will not lose. Our strategic willpower is more resolute than that of our opponent, ultimately discouraging Trump’s government from possibly beginning a strategy of provocation.

In the event that Trump is swayed by those at his side and really wants to play coarse and wild games which neither country will win, China should resolutely enter into such games with America. According to America, there is insufficient domestic support for this mysterious venture, but for China, it is a decisive battle over the defense of our core interests, and we cannot lose.

Trump is a wild card and China is going to need diplomatic imagination to deal with him. We must also have the courage to take action when it is least expected, and form a new pattern of behavior with America akin to “you fight your way, and we’ll fight our way.” Most importantly, we must not be concerned about whether or not the newest occupant of the White House is happy. He repeatedly provokes others, so if he is not being humiliated in return, I am afraid he may feel a bit confused.

Due to his relentless campaign to win the White House, Trump probably wants a grand unprecedented ascension to the throne and to have all other nations make pilgrimages to pay tribute to him before he takes up office as “Trump the Great” – an unprecedented event in world history. But many intelligent people in America are watching Trump because of his derisive attitude, and for this reason they will definitely not be supporting him in fighting his war on all fronts, and will not follow him in creating a new world which stands on the precipice of chaos.

China will not pay protection money in the hopes of an easy and comfortable life. Since the time of Mao Zedong we have never surrendered to the outside. The difference in strength between China and the U.S. has never been as small as it is today. What reason would we have to agree to a pact with Trump that, from China’s perspective, is unfair and makes us feel humiliated?