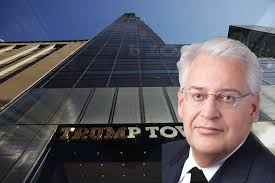 Up until now, Donald Trump has not taken a position regarding the Middle East conflict. With the nomination of the new ambassador to Israel, he is sending a clear message.

When David Friedman leaves his apartment in the wealthy Jerusalem quarter of Talbiyeh, he can walk to the new American consulate in Arnona. And if it is up to Friedman, Jerusalem will not just have a consulate, but the U.S. Embassy. On Thursday, Donald Trump nominated the orthodox Jewish lawyer to be the future American ambassador to Israel. In an initial statement, Friedman stated that he was looking forward to working from the embassy in “Israel’s eternal capital, Jerusalem.”

This would mean a break with decades of American policy, because internationally, the status of the city which is also claimed by the Palestinians continues to be controversial. But in comparison to the other grandiose foreign policy declamations of the president-elect, such as the immediate extermination of the Islamic State, opening an American embassy is doable from a logistical standpoint. Whether a new building is needed or whether just the plaque in front of the six-year-old American consulate will be changed has not been disclosed.

Whether it even gets that far is still far from clear, despite repeated assurances from the Trump camp. A number of Republican presidential winners have announced the relocation of the American embassy to Jerusalem in recent decades. But after assuming office, nothing ever happened.

A Supporter of Settlement in the West Bank

In Friedman, Trump has nominated a person who represents the opposite of the West’s position regarding policies in the Middle East. Like Trump, Friedman has neither political nor diplomatic experience. Friedman supports Israeli settlements in the West Bank. The designated American ambassador is the president of the American Friends of Bet El, an organization that supports Israeli settlers in the West Bank with million-dollar payments.

Friedman endorses the annexation of the West Bank and does not believe that this land seizure would negatively impact Israel’s Jewish and democratic character. Friedman also does not believe that building settlements on Palestinian land in contravention of international law presents an obstacle to peace.

Whoever dissents – for example the current U.S. government, the German federal government, or the European Union – Friedman sees them as hostile. He called Barack Obama an anti-Semite due to the latter’s adherence to a two-state solution.

Friedman wrote about his understanding of diplomacy this past summer. In an article for the right-wing Israeli website Arutz Sheva, he characterized the members of the liberal Jewish-American nonprofit organization J Street as “far worse than kapos,” comparing them to the Jews who cooperated with the Nazis during the Holocaust. J Street advocates a two-state solution – a policy that Israel’s prime minister, Benjamin Netanyahu, also officially supports.

If Trump actually implements Friedman’s positions, then Netanyahu would be caught between the new Washington and his right-wing, national-religious coalition partner, the Jewish Home, a party that also welcomes the annexation of the West Bank. In contrast to them, Netanyahu – a self-proclaimed enemy of the left – would suddenly seem moderate.

Various liberal Jewish organizations in America and Israel are reacting to Trump’s decision with horror. The most important lobbying organization, AIPAC, did not initially issue a statement on Friedman’s nomination.* In the Israeli government itself, there was a great deal of confusion. While the Israeli deputy minister of foreign affairs, Tzipi Hotovely of the Jewish Home party, immediately welcomed the decision, the spokesman for the foreign minister stated on behalf of Netanyahu that the government would wait for the official appointment to make a statement.

The Palestinians received the nomination of Friedman coolly. The PLO General Secretary Saeb Erekat said Friday that the nomination of Trump’s cabinet and his ambassadors was his own affair: “What is not Donald Trump’s business is to determine the capitals of other nations.”

*Editor’s Note: AIPAC stands for the American Israel Public Affairs Committee, and is a U.S. lobby devoted to promoting the U.S.-Israel relationship and the security of both countries.