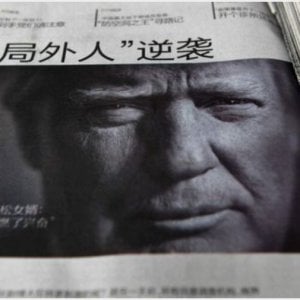 A few days after the telephone call with the Taiwanese leader Tsai Ing-wen, the president-elect alluded to dissatisfaction between factors of the monetary policies of the Chinese and their ambiguous position with North Korea. According to the Global Times, “In response to Trump’s provocations, Beijing could offer support, or even military assistance, to U.S. foes.”

“The Dragon’s” move displaces not only America but the whole world: If Donald Trump continues to question relations with China, Beijing will have no choice but to arm itself against the enemies of the United States. As a result, will North Korea and Kim Jong Un also play the atomic bomb game?

One should not play with fire; the challenge has now become too incandescent for even the proverbial patience of the Eastern giant. “We have taken action on these important declarations and are extremely concerned.” Geng Shuang, a spokesperson for China’s foreign ministry, rationed his words as only a diplomat can, after the president-elect told Fox News not to feel “bound by a one-China policy unless we make a deal with China having to do with other things, including trade.”

The one-China policy is one with which the USA and the whole world has been in agreement, with no explanation, since the days of Richard Nixon and Jimmy Carter. For the West, this means the U.N. sits alongside communist China, and official diplomatic relations with Taiwan are reserved only for the Vatican, which also negotiates separately with Beijing on the appointment of bishops and religious freedom.

But Donald’s phone call to the president of Taiwan, Tsai Ing-wen, who is obviously not recognized by Beijing and who states that the island is part of its territory, has complicated matters. It is now clear to everyone that the tycoon wants to use the island, once known as Formosa, [as a bargaining chip] to force Beijing to allow for manipulation of the yuan. It’s a dreaded trade war that is likely to lead to a real war. “The one-China policy is the foundation for the healthy development of relations with the U.S.,” the Foreign Ministry continues to state. “If this foundation is altered, there is no ground for dialogue or for the further development of healthy and stable relations between China and the United States,” and of course, it [may mark] the end of “their bilateral cooperation in all aspects.”

This is a statement that refers not to war, but to what precedes it: namely, the rupture of diplomatic relations. But the language diplomacy cannot afford to use is easily used by political militants. And the Global Times is not afraid to call Trump “an immature child” and an “ignorant” person who believes “everything is business and has a price.”* How do you want China to react now? “We will show that the United States has not dominated the Straits of Taiwan for a while.”* And of course, there are 1,000 missiles aimed in that direction, and a law passed in Beijing 11 years ago states that China has the right to intervene with force if the island declares independence.

As recently as this weekend, Taipei complained that the military was too close to the coast: “Well, more will come,” insisted the expressive party newspaper. More. “If Trump abandons the one-China policy, publicly supporting Taiwanese independence, China will no longer be able to ally with Washington on international issues and contain the forces hostile to the United States.” But that is not all. Beijing could even “provide support, including military assistance to the enemies of the U.S.” Words this heavy resonate with terror around the world.

Nobody has had the courage yet to whisper the name, but how can you not think of North Korea? Trump has always accused Beijing of not having more merciful advice for the dictator of Pyongyang, who promised to resolve the issue of atomic power during the election campaign while grabbing a burger with the young man who holds the world in check. Instead, just last week Beijing and the U.S. agreed to new sanctions. And these days, it is constantly repeated on TV that China has cut its coal imports, which are 97 percent of the remaining resources of “the Red State.”

The bellows of Mr. Trump are now likely to complicate everything. [Here’s hoping] they remain merely bellows. When you look at the facts, the president-elect seems much more pragmatic: A few days ago he decided to send Terry Branstad, who has been a personal friend of Xi Jinping for 30 years, as the U.S. ambassador to China. This is what expert Victor Zhikai Gao thinks, appearing in front of the CCTV microphones: “Once he feels the weight of the presidency on his shoulders, he will become more rational.” And Professor Zhikai is not the only one with those hopes, in a world now hanging by an atomic thread.