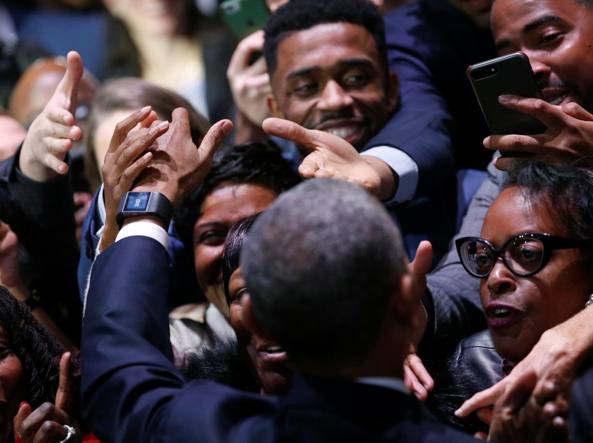 Obama’s farewell was flanked by the sensational news that “secrets” in Russia’s hands could leave The Donald susceptible to blackmail. But for now, they are just unverified allegations. Meanwhile it’s certain that his agenda will be radically different from Barack’s.

Proud and painful, Barack Obama’s long goodbye to the presidency began Tuesday night with a farewell speech delivered in Chicago, his city, the place where he celebrated electoral triumphs in 2008 and 2012. The man who eight years ago went to the White House with an agenda of radical change – one which to its every initiative has largely remained a dead letter for the Republican opposition – now leaves the Oval Office not to the natural successor of his work, Hillary Clinton, but to a radically different and unpredictable leader. A president who also arrives with an agenda of change, but of a radically different nature. Even an opposite kind.

Among Threats to Democracy and Hopes for the Future

Obama bids farewell, leaving once again, a message of hope for the future, for the role that new generations will interpret; but he devoted much of his speech to threats which affect the future of American democracy. A country whose social fabric is torn apart by the increase of economic inequalities, by racial divisions never truly overcome and which are now emerging dramatically, and by an information and communication revolution which is driving people to live in protected bubbles made up of people who think the same way; there is no more exposure with regard to those who have different opinions.

While Washington bounces about rumors of a covert “intelligence” investigation into the Russian regime’s attempt to create compromising “dossiers,” even against Trump, Obama is surrounded by the entire world of his staff who have served him over eight extraordinary years. They arrived in Chicago to bid farewell to their president, but are still in shock, in disbelief. They never considered Trump’s victory to be a distinct possibility and now fail to grasp that a character whom they considered a political buffoon now has the power to demolish nearly all of their years of work, to destroy all that has been built by Obama and his administration: health care reform, environmental policies, and international agreements to reduce global warming, maybe even the pact with Iran over nuclear energy.

Obama’s last oratory “performance” was painful, almost depressing, even its context: welcomed in his Chicago by an icy wind and by a city mired in a crime spree not seen for decades; 762 murders in 2016, more than double compared to two years ago, more than New York and Los Angeles, two much larger cities, combined.

Eight Years Without Scandal, but with Errors

But tonight, eight years of Obama in the White House are to be celebrated. His presidency has been a great success in terms of political style: eight years without smears, without scandals, a respected leader and loved the world over. But style is not political substance. The decision to not engage America in new conflicts has left room for the Islamic State and Putin’s Russia. And Trump, going from lack of style to embarrassing retorts, has managed to establish himself over the other Republican candidates and steal the White House from the Democrats.

The Situation of Russian Videos with Prostitutes

Now, there’s a new obstacle for Trump: unverified allegations of Trump’s representatives in dense consultation with the Kremlin during the crucial months of the election campaign and incriminating videos recorded by Russian spies in order to blackmail the new U.S. president; footage of Trump with some prostitutes during a trip to Moscow in 2013. A situation to which Trump replies with a tweet: “FAKE NEWS – A TOTAL POLITICAL WITCH HUNT.” Obama in his farewell speech never mentioned Trump, but his shadow loomed over the arena in Chicago chosen by the president to say goodbye to his people: “Thank you all […] you made me a president, and a better man.” And then the invitation to young people to shape their future, not to treat democracy and civil rights as something acquired once and for all; a message that they must be defended every day.

Regret for Things Not Done

Obama’s concern for what will be left behind and the regret for things not done is clear. There are those who will reproach him for not being tough enough, for having his hands tied by Republican filibustering almost without reacting, while now in Congress conservatives are already demolishing Obama’s health care reform act with pickaxes. Obama knows that he should have beaten his fists on the table, but that’s not his style, and in any case, as the first black president in American history, he has been held almost at gunpoint by much of conservative White America. Of course he could never have embodied the stereotype of the angry black man who loses his temper easily. At the end, when he spoke of his lifelong companion, Obama gave in to emotion. Everyone cried. Except for her, the rock that is Michelle.