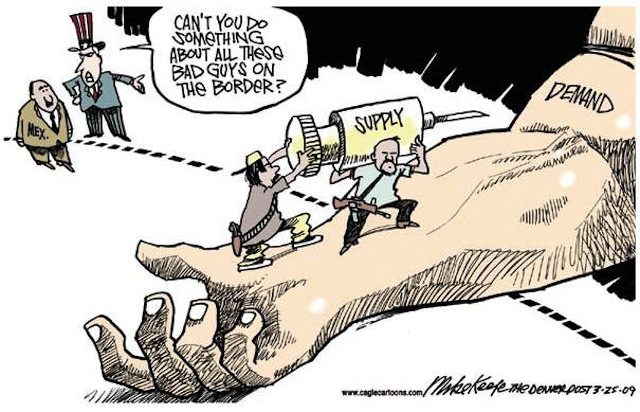 A recent report by the U.S. State Department states that the country is experiencing the greatest crisis of drug use since the 1980s, that almost all of the heroin being consumed comes from Mexico, and that cocaine production has shot up in Colombia, returning to historic levels, despite, the text acknowledges, the efforts conducted by both countries. At at the same time, drug trafficking increasingly penetrates into Venezuela, Ecuador and Bolivia, without opposition from the governments of those countries.

The crisis in drug use in the United States does not result from increased production in Latin American nations. If that were the case, if the supply far outstripped demand, drug prices in the illegal market would have dropped dramatically. That has not been the case. To the contrary, the report written by William Brownfield explains that, for example, heroin consumption increased dramatically because legal medicines that could serve as substitutes, including antidepressants, were restricted and their prices increased. Heroin has been moving in to occupy their place. That is why the current epidemic of opiate consumption, unlike that of the 1980s, does not affect African-Americans as much as it does the white middle and lower middle class population of states like Ohio that have lost their future prospects.

The epidemic and the exponential increase in heroin consumption are real. Just in the last year, more than 13,000 young people died of overdoses in the United States. In addition, the consumption of cocaine and, above all, synthetic drugs, has increased. Marijuana use has increased dramatically, but it turns out that its sale and production is legal in half the states in America and the study of its consumption at this point would have to be based much more on simple market studies and public health.

But the issue of heroin is different and involves us directly because almost all of it comes from Mexico and because it is the biggest drug consumption problem facing the United States. If 13,000 young people died in the U.S. last year from heroin overdoses, in Mexico, some 15,000 young people died from settling scores and violent acts in the two great areas of opiate production: the Golden Triangle, where Durango, Sinaloa and Chihuahua join; and Tierra Caliente, in Guerrero, Michoacán, in the state of Mexico. Those are also the country’s two zones of greatest violence, to which are added, especially in Tierra Caliente, the very serious problems of poverty and governability.

As usual, the Department of State’s report emphasizes production, but in this case it also recognizes the serious challenges that domestic demand presents. Even the author of the report, who acknowledges collaboration with Mexico, says that what has to be built on the border is “a wall of cooperation” rather than a physical one. And that is the truth: Beyond Donald Trump’s bragging and sharp tone, heroin production and consumption is one of those issues where it is possible to reach agreements of substance, beyond the plans named for Colombia, Mexico or wherever is chosen.

It would be possible to test joint mechanisms that are efficient and satisfy both countries and governments in combating drugs. It is true, as the report says, that 93 percent or 94 percent of the heroin consumed in the U.S. is produced in Mexico, but it is not just produced. Somehow it reaches the border, and crosses into the U.S. and from Laredo, El Paso or Nogales, arrives at places hundreds and thousands of kilometers away, in every city in America. Betting on simply destroying plantations in Mexico will solve little or nothing, as long as the networks continue to function. And of course we must destroy those that operate here, but paradoxically in this case, the main networks are those that operate on the other side; first, because they are the ones that allow the drugs to enter, those that assemble them at border locations, the ones that take drugs to cities around the country and deliver them to local gangs for sale. And then the same road is followed in reverse to gather the money together and to launder it, which also happens within the U.S. itself.

Why is it that in Mexico, Colombia and other countries, narco chiefs, their hitmen and henchmen are captured and yet new ones appear to replace them? Well, because the networks on the other side of the border continue to function, and as long as that connection is maintained, as long as the routes to consumers exist, demand will persist. That is simply how markets work. The U.S. must break up those networks, not administer them, as its top officials say privately, if the goal is to break the chain of consumption. Without that, it will be impossible for producers to be eliminated in our countries. New ones will always appear to fulfill the demand.

That does not mean, even remotely, that we should wait here until the issues are resolved there. For years, this argument, which is really an excuse for impunity and complicity with criminal groups, has been raised. But a fight that is not comprehensive is worthless. That comprehensiveness should lead to discussions of conceptual and legal topics (Should marijuana be legalized throughout the region? Does it make sense to ban it in countries and some states while it is legal for recreational use in others?) but also to very concrete mechanisms. If we want to end the epidemic of heroin consumption there and the incredible wave of blood and violence here in the Golden Triangle and the Tierra Caliente, a common strategy must be established, in which binational groups work on the problem and collaborate on intelligence, information, arms control and money laundering, and, above all, destroy the networks in both countries.

Paradoxically, Trump’s rhetoric is what most hinders this type of collaboration, as well as the resistance on this side of the border to advance such a strategy, which is partially understandable when it is seen that on the other side of the border networks persist without even being touched.

It can be said that there are hundreds of thousands of people (actually about 2 million) arrested in the U.S. for drug problems, but consumers and dealers make up the majority, and, as we have seen, the real networks continue to function, operate and grow. On these issues, let us build a wall of real cooperation and then one will see the benefits for both nations.