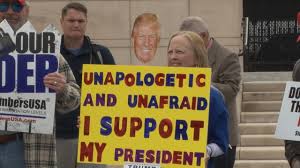 As CNN’s star commentator, Van Jones, acknowledged, Donald Trump should have really become president on Feb. 28 at his first address to Congress.

In a tone that was sober and presidential, optimistic and cheerful, he emphatically paid tribute to soldier Ryan Owens, who was killed in Yemen. “That was one of the most extraordinary moments you have ever seen in American politics, period. […] If he finds a way to do that over and over again, he’s going to be there for eight years,” Van Jones dared to suggest, going on to say, “For people that have been hoping that maybe he would remain a divisive cartoon, which he often finds a way to do, they should begin to become a little bit worried tonight.” The polls were good that day: 76 percent of viewers asked by CBS News/YouGov approved of the speech, while 70 percent of viewers felt more optimistic after having listened to the president, according to a survey by CNN/ORC.*

Has Trump come to understand that you cannot govern without the institutions of the Founding Fathers, or has he simply adapted himself to his public? Since March, the president’s approval rating has hovered around the 36 percent mark. As time has gone by, he has adopted a more moderate tone. His speech in Saudi Arabia a few days ago was worth Trump’s weight in peanuts for this reason: there were no sermons, the speech urged everyone to live according to one’s own customs and not interfere in each other’s business, and called on us to unite against the Islamic State and Iran.

Whether they get moderation or flowery rhetoric from their idol, his fans won’t budge. And it would be counterproductive to doubt their sincerity. As in Europe with the nationalists and populists, the Trumpists embody a return to the roots of identity: nation, patriotism, and the parts of people which they have lost through the accelerated globalization of economies and societies. Sometimes cynical, most speak coherently; thinking for themselves and wanting to reshuffle the deck of an establishment which, according to them, has monopolized power for too long.

Here is the feedback from the United States, some spontaneous answers from Trumpists gleaned here and there (without any scientific or probing pretensions):

Violent, bad-tempered, vulgar, Trump? “What does it matter? We’re not interested in a president who worries about his image, but someone who acts and who runs the U.S. like a business. Obama was polite, and look what state he left the country in! We don’t need a president who’s liked by Europeans, but a strong president, or at least stronger than spineless Obama.”

Protectionist, your new president? “It’s the only way to get industrial jobs back to the United States. China has benefitted from one-sided free-trade for too long. We are delighted that 300 million Chinese people have been lifted out of poverty, except that we, the American middle class, we’ve been taken for a ride.” This can be seen (for the more well-read) on the now famous curve in the shape of an elephant which demonstrates that the American and European middle classes are the main losers in globalization.

NATO is obsolete? While Trump goes to Evere to visit the new NATO headquarters (worthy of Athenian cities) of this extraordinary organization for defense solidarity, his supporters respond, “Absolutely. Why does Europe only contribute 20 percent of the budget? It’s time for Europeans to look after their own defense while we look after our social security.”

Isolationist Trump? “Europeans always complain that the United States polices the world, you should know. The invasion of Iraq cost us hundreds of billions of dollars and what for? The Islamic State group is at the gates of Europe and will soon arrive in North America. So why go to war given the world? So that the Japanese can handle Kim Jong-un? That’s none of our business.”

The links between Trump and Russia? Gossip for the tabloids. “We don’t want a new Cold War with Russia. Putin has got guts to go up against the Islamic State group. It’s better to have him with us than against us.”

The president and half of his team are billionaires, are you not worried about conflicts of interest? “Quite the opposite! At least they’re making sacrifices for their country; they’ll be making a hundredth of what they did before as White House advisers. And they won’t take our money because they have it already. We’re fed up with this self-serving political clique in Washington. Just look at Bill Clinton’s fortune…”

The Muslim ban, is that not contrary to American values? “You’re joking? It’s only seven countries out of 51 in the Organization for Islamic Cooperation. On the contrary, the 90-day moratorium isn’t enough.” As for the judges, “They are all on the left, and they put their personal legal interpretation in front of the national interest. Do you know that Muslim countries prohibit Israelis from entering their territory just because they’re Jewish? Why does no one talk about that?”

The wall along the Mexican border, shocking? “He promised it. There are about 50 walls like that around the world and the United States has 11 million illegal immigrants. Some aren’t even learning any more English. Is it not legitimate, sir, to curb this immigration? Of course, they are not all criminals and drugs traffickers. I’ve got Mexican friends myself.”

The proposed abolition of the green card lottery system? “It’s based on chance. It’s a ridiculous system! Better to have a selective immigration system, like in Canada.”

And the regressive attitude to abortion? “Trump is right: Abortion has become a method of contraception which is encouraged by family planning clinics at the expense of the taxpayer. But anyway, that’s not the crux of the matter.”

At the poolside is an older gentleman with a Rolex. He’s wearing the regulation T-shirt bearing the image of Trump: “Sir, don’t listen to the press. All the journalists are on the left and they distort reality. CNN lies all the time. Me, I only listen to Fox News and read Breitbart.com…”