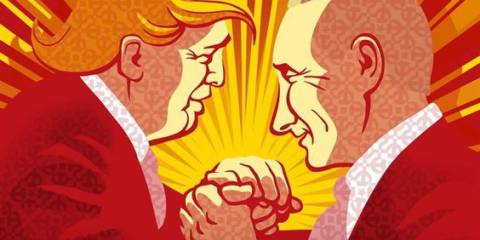 President Donald Trump has done nothing to clear up the confusion around his links with Russia.

Donald Trump became president of the United States barely six months ago. It was the culmination of a campaign that was full of promises, but also full of insults. It was a political process stained by the then Republican candidate’s accusations against his opponents, interlaced with promises to turn the country into a political, social and economic utopia.

But as it has turned out, after more than half a year, it has been more of a dystopia, often hard to believe. It is threatening to project itself from the White House out into other centers of political and administrative activity in the country.

The findings on Russian interference in the U.S. election started emerging before Trump was inaugurated, and to date, the president has done little to reassure the public at home and U.S. allies around the world. The latest revelations in the case, combined with the president’s statements and his meetings with Russian leader Vladimir Putin, have added to the doubts, raising them to unexpected heights.

When the president got rid of FBI Director James Comey, he named Robert Mueller, a respected attorney and former FBI director, as special counsel to investigate the Russian interference.* Now, the president has raised the possibility of firing him, and has warned him not to dig too deeply into his business dealings. There have also been leaks about White House investigations dedicated to getting information that could be used to discredit the special counsel and his team.

Former Sen. Jeff Sessions, now attorney general, angered the president when he recused himself from overseeing the investigation after doubts arose about his testimony before Congress, in which he failed to mention a meeting with the Russian ambassador during the election campaign. Now, together with his statements about Mueller, Trump is venting his anger against Sessions and saying he regrets having appointed him.

Washington insiders are waiting for Sessions to resign as attorney general, but he has said that he will stay on in the post as long as that is appropriate. Trump hasn’t insisted on the firing, perhaps because of adverse reactions in Washington.

The concern over the statements about Sessions and Mueller is the climax of the chapter that started during the Group of 20 summit in Hamburg, where Trump met with the Russian president on two occasions. At the second meeting, the only other person present was the Russian translator. What did they talk about? The White House has provided only a very brief and unobjectionable report.

The president didn’t get a breather when he returned from the summit. The media revealed contacts between members of his family, some of the influential people who were the driving force of his campaign, and an attorney close to the Kremlin who offered damaging information about Hillary Clinton.

On Thursday, July 20, 2017, the concerns increased when the press broke the news about Trump’s request to his attorneys to investigate the extent of his power to grant pardons. Could he pardon himself and his close relatives in advance?

The news explains the concerns arising from the decision to suspend aid to groups opposing Bashar Assad in Syria, giving a victory to the Kremlin. The action, in line with so many incidents related to the Russians, confuses and worries people inside and outside the United States. The tremor that could result from this “affaire” would have repercussions in the remotest corners of the planet.

*Editor’s note: The Justice Department appointed Robert Mueller as special counsel on May 17, 2017 to oversee the investigation into ties between President Trump’s campaign and Russian officials.

About Tom Walker 224 Articles
Before I started working as a translator, I had had a long career as a geologist and hydrologist, during the course of which I had the opportunity to work on projects in Mexico, Chile, and Peru. To facilitate my career transition, I completed the Certificate in Spanish-English Translation from the University of California at San Diego. Most of my translation work is in the areas of civil engineering & geology, and medicine & medical insurance. However, I also try to be aware of what’s going on in the world around me, so my translations of current affairs pieces for WA fit right in. I also play piano in a 17-piece jazz big band.