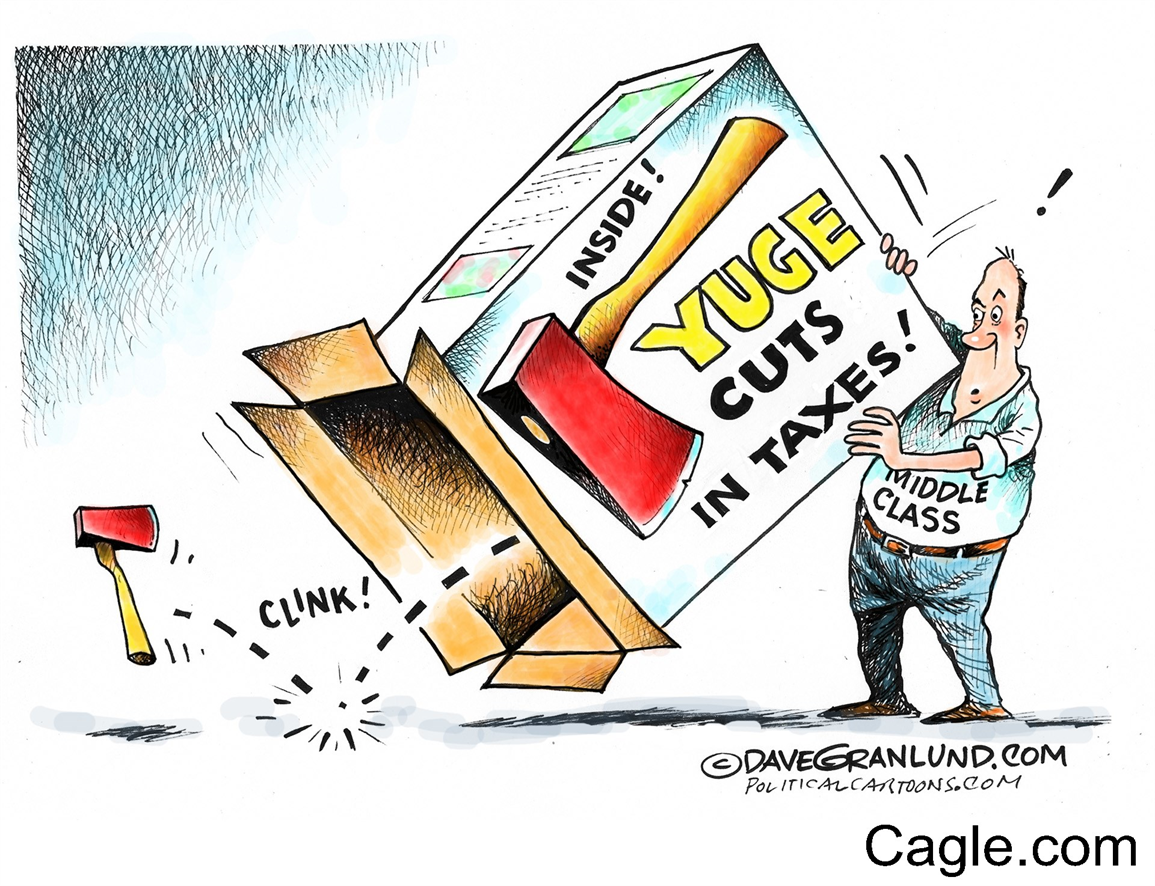 Relief for the rich, a burden for the poor: Trump promised differently during his election campaign. And his tax policy might not help the economy either.

It was no coincidence that of all places, Trump chose the state of Indiana for his appearance. Four years ago, Vice President Mike Pence adopted moderate tax rebates; shortly afterward, the state of Indiana experienced an upswing that brought jobs and growth.* Donald Trump and his Republicans view it as an example of where the old formula of tax reductions and deregulation is still effective. Now he wants to apply the model to the rest of the United States.

The “largest tax cut in our country’s history,” Trump promised the invited guest in the city of Indianapolis. The package would get the country started like a rocket; jobs would come back and salaries would rise. His tax plan was nothing less than a “middle-class miracle” — a miracle drug for America’s middle class.

Trump left the details of the nine-page concept unspecified in his speech; they must be contested in Congress during the coming months. The eventual law, if it should come to that, will contain several hundred pages. Yet, Trump had the basic components of the purported magic formula ready: Corporations and individuals would supposedly profit from massive tax relief. The highest income tax rate would fall from 39.6 percent to 35 percent; corporations would no longer pay up to 35 percent in the future, but, instead a maximum of 20 percent. Closing numerous loopholes and exceptions are supposed to pare down the massive U.S. tax code and shrink the number of tax brackets from the current seven to three.

The cuts are supposed to trigger America’s comeback. “Tax reform is the most important thing we can do to restore confidence to this country, to get jobs and prosperity,” summarized a staunch Paul Ryan, Republican majority leader in the House of Representatives, one day in advance. Rich people like himself should not profit, Trump promised on Wednesday, but instead the “every-day American” should benefit.

A Gift to Millionaires and Corporations?

More generous tax deductions for child care and doubling the individual tax exemption serve the Republicans and their president as the clearest evidence of newly-discovered love for the average American. Whoever earns less than $12,000 will pay no taxes; for couples, the amount is raised to $24,000.

However, outside of one’s own ranks, hardly anyone believes the big promise behind the paper. “The idea that this plan would help average Americans instead of the wealthy and big corporations has been a hoax all along,” said Frank Clemente of the organization Americans for Tax Fairness. This proposal isn’t tax reform; it’s just a big giveaway to millionaires and corporations. “It won’t ‘trickle down’ to the rest of us,” the tax expert is certain. The plan will neither lead to a robust job market nor stimulate economic growth.

Right at the beginning of the millennium, former President George W. Bush had already tried reducing taxes for the economic elite twice, explained Clemente. The promised effects never happened. “No one today remembers him as a great jobs president,” Clemente said.** Even in Indiana, it is too early to say whether the one thing has anything to do with the other, claim economists.

Even Investment Banks Are Skeptical

Only a few years ago, numerous U.S. companies used a temporary tax hiatus to bring around $300 billion in foreign profits back home — the majority of the profits flowed into buying up their own stocks. A trickle-down miracle – that is, that the success of the rich would trickle down to the lower social classes through consumption and investment — was therefore not anticipated by the liberal Economic Policy Institute in Washington. Tax relief for corporations would — differently from what the conservatives maintain — primarily flow into dividends or stock buybacks, not into the creation of jobs or the household funds of the middle class.

In spite of the pleasure over relief for corporations, even Wall Street is skeptical: Investment bank Goldman Sachs soberly calculated in the past few weeks that tax reductions of this scope would only mean between 0.1 and 0.2 percent additional growth in the coming years.

Meanwhile, the middle class could really use the help. U.S. household incomes, after adjusting for inflation, have not risen since the 70s. Instead, the discrepancy between the poor and the rich has further widened. A good 40 years ago, the richest Americans had more than 8 percent of the national income; today it’s around 20 percent.

Lowest Tax Bracket Should Rise; In Contrast, Inheritance Tax Will Be Dropped

Many doubt that the Trump administration, of all things, will sustainably improve the situation of U.S. households, especially as the tax promises to the middle class remain vague on crucial points. It is completely open as to roughly when the three planned tax brackets will take effect and who will pay how much in the end. What is concrete, however, is that the lowest tax bracket will be raised from 10 percent to 12 percent at the will of the Republicans. Low-income earners will initially be more burdened, not less.

Meanwhile, the gifts to society’s elite are apparent: The inheritance tax that only applies to fortunes in excess of $5.49 million is supposed to be stricken without substitution. In his announcement, Trump sold the elimination of the “death tax” as a great relief for the attending farmers in spite of this. Taxes on foreign profits of multinational corporations are supposed to be dropped, and profits up to now can be taxed in the home country at a discounted rate. Reductions in taxes for the profits of hedge funds remain intact; firms that until now were encumbered by the higher income tax bracket due to their legal structure can count on a friendlier flat rate of 25 percent. Clemente summarizes, “Instead of small businesses, hedge fund managers and real estate moguls like Donald Trump profit.” **

Who is Supposed To Pay For That?

It is also unclear how the package is supposed to be financed. The Republicans are counting on an additional budget burden of $1.5 trillion over the next 10 years in the best-case scenario. For that reason, there will need to be cuts in other places. According to the plan, residents of primarily Democratic states with high-income taxes, like, for example, New York or California, are supposed to lose the possibility of reducing their federal tax burden. The incredible cost of the system, Clemente believes, would also lead to cuts in social services and in the education sector — and thus hit exactly those Americans who were promised a better future.

In the meantime, Indiana, too, has had to observe that tax cuts are really not a miracle. For the coming year, the state voted in a considerably higher gasoline tax because there was a lack of money for urgent infrastructure projects.

*Editor’s note: Mike Pence was a former governor of Indiana.

**Editor’s note: Although accurately translated, this remark by Frank Clemente could not be independently verified.