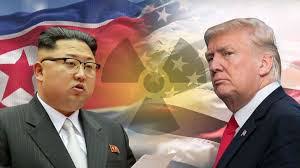 Over the past few days, the international scene has been dominated by news about the upcoming historic summit between President Donald Trump and North Korea’s Kim Jong Un, to be held in late May. The summit comes after horrifying statements and a war of words that are rare in the history of international conflict. Russia’s Sergei Lavrov describes it as “a bit like a kindergarten fight.”

The promises of war between the two countries reached a climax after recent missile tests conducted by Pyongyang last August and the announcement of North Korean ballistic missiles capable of reaching the United States. North Korea also went further by revealing a detailed plan to target Guam, and President Trump threatened to respond with “fire and fury.”

In a sudden turn of events, Trump was quick to agree with the North Korean leader, recalling the words of the late British leader Winston Churchill: “A nation has no permanent enemies and no permanent friends, only permanent interests.” These interests sometimes collide.

Washington appears to be softening its threats to destroy Pyongyang because Trump is convinced that Kim is a reckless and unpredictable figure, and that any conflict with Pyongyang will drag the world into a third world war.

Trump did well in accepting the option of exploratory negotiations between the two nations, but the question remains: What are his chances of accomplishing what his American predecessors did not?

Experts believe that the summit should be preceded by preparatory meetings between the two countries to discuss how Pyongyang will get rid of its nuclear arsenal and what it will receive in return when the two leaders sign a final agreement at a later stage.

Trump is optimistic, however, that he has achieved “tremendous success” with the agreement to meet and believes it will free the Korean Peninsula from nuclear weapons.

Trump “isn’t doing this for theater. … He’s going to solve a problem,” said CIA Director Mike Pompeo. Pompeo said that America would make “no concessions” to North Korean leader Kim for his talks with President Trump over the reclusive nation’s nuclear program.

The world awaits the outcome of the summit. Whether or not the meeting will defuse the tension on the Korean Peninsula and spare the world the scourge of nuclear war is something that will be revealed in the coming days.