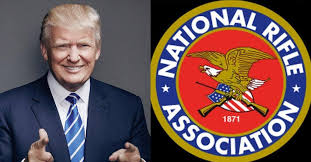 There is not much left of Trump’s resistance against the gun lobby. At a convention in Dallas, the U.S. president demonstrates his solidarity with the NRA.

At the meeting in Dallas, the little misunderstandings between the gun lovers and their president seemed to never have happened. Back in February, just days after a shooter killed 17 people in a Florida high school, Donald Trump had scared them with an unexpected gesture. “You’re afraid of the NRA,” the president said during a meeting with members of Congress concerning the powerful gun lobby. Under the concerned eyes of the Republicans in attendance, many of whom were elected thanks to money they received from that group, Trump announced a comprehensive gun law meant to raise the minimum age for gun purchases, fill the gaps in the checks on arms buyers and make the country safer.

On this day though, most of those plans are gone. About 80,000 members of the gun lobby traveled to Dallas for their annual meeting, where they marveled at the newest models, added a couple of additional pieces to their already abundant collection and, most importantly, sympathized with each other in these difficult times. The president is present too; he has even brought his vice president. As he enters the stage, Trumps has his picture taken with the CEO of the NRA. He gives the thumbs-up.

During Trump’s speech, he claims that the people there are “real patriots.” The president knows that he is speaking before a well-disposed public that celebrates his current track record as a success: more money for defense, the rigorous fight against illegal immigration and the appointment of conservative judges. Trump spends several minutes quoting newspaper articles that question the legitimacy of the Russian investigation. He criticizes the nuclear deal with Iran and mocks former Secretary of State John Kerry, saying that he only got up from his desk to fall from his bicycle. It is a campaign speech, a visit with friends.

Nowhere Are the Borders More Open

Improved gun laws? A president who opposes the NRA? On the contrary: Trump has long since reverted to advocating for the gun lobby. For this reason, too, he evidently feels that he can take his time before getting to the actual topic. When he does, he mentions the terror attack in Paris, the prime example for those who are looking for arguments against a ban. If only a single weapon had been pointed in the direction of the attackers, “it would have been a whole different story,” he says, and then calls for arming school staff and warns about the dangers of immigration. According to Trump, nowhere are the borders more open. According to him, the country needs to defend itself and “the people in Washington” must “support our freedom,” he says, as if he were not one of those people in Washington.

In any case, just a few months after the Florida mass shooting, little has changed in Congress. The few changes that have been made are limited to modest change to the gun buyer database, the increase of funding to arm teachers and a plan to ban a device that turns semi-automatic weapons into machine guns – measures that Mike Pence called “American solutions” in his speech that even the NRA can accept. A commission set up by the president to develop further ideas has been silent for months. Critics see it as a tool meant to drive the issue into the background.

Trump and the NRA: a Symbiotic Relationship

The president may have fulfilled the expectations of attending NRA members. Trump is speaking for the fourth time in a row at the NRA’s convention. There is a highly mutual loyalty between him and the NRA, an almost symbiotic relationship that goes beyond political sentiment. The group pumped $30 million into Trump’s campaign and mobilized its 5 million members to vote. In return, Trump promised to use his position in Washington to keep their rights in place. “You came through for me and I am going to come through for you,” he said a year ago during his speech in Atlanta, shortly after being elected.

However, the debate has accelerated since then. For a long time, the issue of gun control did not carry as much political weight as it does this year. Mass shootings such as the one in Las Vegas in October, when a gunman killed 58 people from his hotel room, but especially the high school rampage in Parkland, Florida, as well as student activism, have added urgency to the discussion of stricter gun laws over the recent months.

About two-thirds of voters under 30 are now in favor of stricter gun laws. The proportion of those who support a ban on assault rifles has risen from 41 percent to 58 percent since 2013, the year of the NRA’s previous meeting in Dallas. In the light of these figures, gun opponents speculate that for the first time, the demand for a ban could become a key factor for their side in the midterm elections, similar to the role played on the other side by the NRA members’ fear of stricter controls. Hundreds of thousands of people took to the streets in March to fight for stricter laws and to pledge to vote in the November elections.

Trump may also be aware that this year he needs the support of gun owners more than ever if he wants to secure the majority in Congress and safeguard his agenda. During speeches in the last few weeks, the president has called for cohesion among his supporters and warned them that, should the Democrats win, their rights would be endangered. Dallas is no exception, as he reminds the audience: “Democrats and liberals in Congress want to disarm law-abiding Americans at the same time they’re releasing dangerous criminal aliens and savage gang members onto our streets.” They should not get lazy now, he says, adding that more, not fewer conservatives are needed in Washington.

Will this speech be enough? Dallas has given us a preview of the new mobilization from gun opponents. Democratic members of Congress from Texas wanted to prevent the meeting from taking place in their city. Demonstrations surrounded the venue. There is especially one rule that galled the protesters: Before speeches by Pence and Trump, those attending had to hand over all their weapons. David Hogg, one of Parkland’s survivors, was among those who highlighted the double standard. “It’s ironic that they feel they need to ban guns to protect themselves especially after their main philosophy has been more guns equals more protection,” he said.