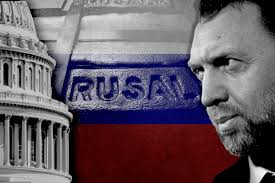 Analyst Timur Nigmatullin explains why the U.S. is not rushing to call off the sanctions against Russian companies

Businessman Oleg Deripaska agreed to reduce his stake in En+ Group, a holding company of Rusal, below 50 percent and leave its board of directors.* Prior to that, Steve Mnuchin, head of the U.S. Department of the Treasury, said that the U.S. has no purpose to take Rusal out of business and called the negotiations with the company promising. However, these expectations went largely unmet: Sanctions against the aluminum giant were not called off. The department only extended the deadline for investors to comply with sanctions against Deripaska and companies En+ and Rusal in order to smooth over the upheavals in the financial markets before June 6. I don’t believe that Rusal can get rid of sanctions that fast — the U.S. desire to use protectionism in order to maintain economic growth remains too strong. The United States went very far to protect its own business interests.

I want to remind you that, in the course of his election program, the current U.S. President Donald Trump promised – among other things – to provide American metallurgists, including aluminum producers, with large-scale support measures. For example, a twofold increase in capacity utilization — up to 80 percent, was in question. Accordingly, against the background of these promises, the decision to impose a 10 percent duty on aluminum imports looks natural. At the same time, restrictions against Rusal were imposed not simply in the way of a one-sided increase of duties, but with the help of sanctions. Technically, this format reduces to almost zero the risks of disputing the decision through the World Trade Organization mechanisms with subsequent compensation of losses.

As we can see, the U.S. political authorities are good at learning from their own mistakes. In 2002, U.S. President George W. Bush introduced duties on imported steel. The EU, Ukraine, Japan, China, South Korea, Brazil and Russia, which was not a member of the WTO at that time, were put under these duties. However, after these countries sent a collective action suit to the WTO in 2003, duties were canceled with the corresponding reputation and financial losses for the United States. Now sanctions are used to accelerate economic growth.

The fact is that now the world is more globalized than ever before. Especially from the point of view of international trade and the financial market. The “soft” monetary policy of the central banks of the world’s largest economies (China, the U.S. and the eurozone) along with the universal transition of countries to a floating exchange rate, contributes to the acceleration of the global GDP growth rate. For example, the International Monetary Fund raised its forecast for the dynamics of the global economy for 2018 and 2019 to 3.9 percent. It is worth noting that such rapid growth has not been observed since 2010.

However, direct protectionism is stimulated by the features of the modern global economy. Many countries seek to manipulate such economic growth drivers as international trade or access to capital markets, including through sanctions. For example, in 2014, Western countries imposed sectoral sanctions against Russian companies and banks; Russia imposed a food embargo against European producers, thus supporting the domestic market for agricultural products. The balance of visible trade, for example, is directly summed up with the volume of GDP. The artificial restriction of imports, along with simultaneous stimulation of exports, can significantly accelerate economic growth. The way of stimulation through sanctions has become more popular in recent times, due to its extremely high effectiveness. As it was already noted, it allows you to romp through the strict requirements of the WTO or numerous international agreements.

It seems that Rusal can hardly expect that the desire to use protectionism to maintain economic growth will weaken, even in the case of a formal need to cancel or soften sanctions.

Perhaps the best way out for Russia is to develop its own economy and infrastructure, such as capital markets, payment systems and regional supranational institutions: the Eurasian Economic Union, the Mir payment system.** It is also necessary to stimulate the domestic financial market and integrate with the markets of Asia.

*Translator’s Note: Oleg Deripaska is a Russian oligarch, aluminum magnate and philanthropist. He is the founder and owner of one of the largest Russian industrial groups, Basic Element.

**Translator’s Note: MIR (Russian: Мир; lit. the world or peace) is a payment system established by the Central Bank of Russia. The Eurasian Economic Union is a political and economic union of states located primarily in northern Eurasia.