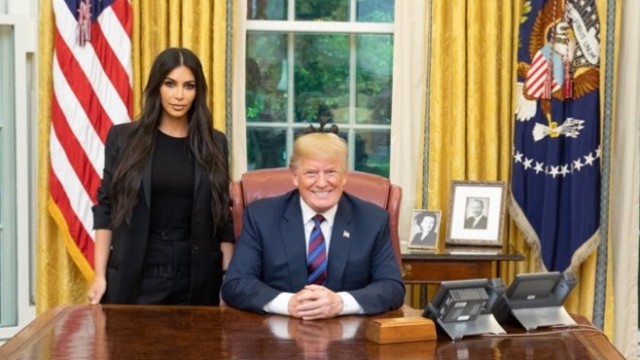 Reality stars get together: Kim Kardashian visits the U.S. president in the White House with a serious request.

The visit first became public on Wednesday morning, and excitement among the social and tabloid media reached fever pitch. Kardashian, a well-known self-promoter, is actually a Democrat, but she is married to rapper Kanye West, a recently converted Trump fan.

Instead of bringing along a camera team as she does in her reality TV series “Keeping up with the Kardashians,” Kardashian brought along a serious request regarding the future of Alice Johnson.

The 62-year-old African-American woman has been in prison for 21 years. Although she had no prior convictions, she was sentenced to life in prison for her involvement in drug dealing. Kardashian learned about Johnson’s case through an internet video. In an interview, Kardashian stated that spending her money on material things was no longer satisfying. “To save someone’s life and do that once a year, that would make [my] heart fuller.”

As a result, Kardashian turned to Trump’s daughter, Ivanka, who put her in touch with her husband, Jared Kushner. After lengthy negotiations, Kushner invited Kardashian to a meeting. The period during which Trump’s son-in-law was considered the administration’s all-purpose weapon for dealing with issues has since passed. However, the 37-year-old Kushner has found a project close to his heart with respect to reform of the judicial and penal system. Unlike Kardashian, he is not only familiar with the subject from the internet, but also from his own family’s experience: In 2005 his father, real estate developer Charles Kushner, served 14 months in federal prison on charges of tax evasion and making illegal political contributions.

Even Conservatives Call for Reform

Activists have been calling for reform of the judicial and penal systems for a long time. For decades, the system has become increasingly stricter, even under Democratic presidents like Bill Clinton. The system harshly punishes even minor offenses. If someone who is poor, or a member of an African-American or Hispanic minority commits the smallest infraction, the offender is quickly sentenced to decades in prisons that are often run by private or for-profit companies.

The Koch brothers, major conservative donors and presidents of Koch Industries, companies that are worth billions, are not known for supporting leniency, but even they advocate liberalization – although critics accuse them of wanting to establish a lucrative private social rehabilitation business.

The idea of reform also has supporters in both parties of Congress; something that happens seldom enough. If conservative donors and supporters across the aisle are for it, who could stand between Jared Kushner and his first political success?

The answer is Jeff Sessions. The U.S. attorney general comes from prison-happy Alabama, and is known for his hard-line stance. After a one-month battle, he succeeded in taking lowered sentences for minor infractions off the table. That action was supported by Trump, who presents himself as a champion of law and order, and has publicly suggested imposing the death penalty on drug dealers.

A bill supported by Kushner that offers improved social rehabilitation programs as well as improved prison conditions for mothers theoretically has a chance of succeeding even though it goes too far for some Republicans and not far enough for some Democrats. Nonetheless, Sessions has already announced privately that if the bill becomes law, he will immediately order extensive studies that would thus delay implementation.

The conflict over prison reform once again confirms that the current White House administration, one which is operating like a TV show, realizes that proposing laws is complicated, but in contrast, executive orders conceived with PR in mind are quick to bring considerable attention.

A few days ago, Trump issued a posthumous pardon for the first heavyweight champion, Jack Johnson, at the recommendation of Sylvester Stallone. Kardashian’s request on behalf of Alice Johnson apparently has a good chance. Via Twitter, Kardashian thanked Trump, and stated that she was hoping for a pardon. “We are optimistic about Ms. Johnson’s future and hopeful that she – and so many like her – will get a second chance at life.” A further Kardashian appearance this season on “The Trump Show” is likely.