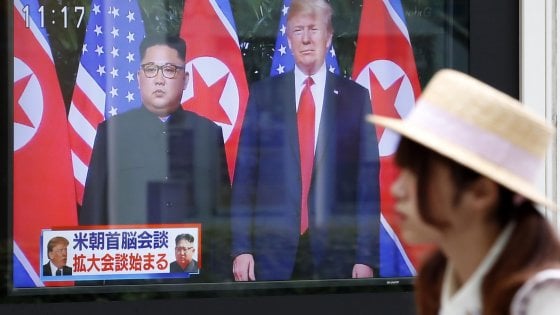 On a small Singaporean island, two leaders who were threatening each other with nuclear war just a few months ago shake hands and smile before the cameras.

“Many people in the world will think of this as a form of fantasy … from a science fiction movie.” That was how the North Korean interpreter translated the statement of his leader, Kim Jong Un. The incredible is happening now, on a Singaporean island: two leaders who were threatening each other with nuclear war just a few months ago shake hands and smile before the cameras. Donald Trump started the summit with a prediction that is a promise, even a certainty: “It will be tremendously successful. […] We will have a terrific relationship.” The two have set the mood for the day. They badly wanted this unprecedented summit and have decided that it must be a success. At least as far as the optics are concerned, they are in complete agreement. Neither has anything to gain from a misstep or a jarring note. The world is watching them in disbelief and bafflement. This is their show, and it is going to succeed if they want it to.

As the half-day long summit goes by quickly here in Singapore – first the one-on-one meeting where the interpreters are the only other participants, then expanded talks with the delegations, finally the working lunch – we need to remember that it was Kim Jong Un’s idea to organize this meeting between the two former mortal enemies. Today, he has won the jackpot in the lottery of history: The 30-year-old head of a criminal regime, condemned by the whole world, is being treated as an equal, and with the courtesy reserved for great statesmen, by the same president of the U.S. that did not hesitate to insult the German chancellor and the Canadian prime minister. However, even Trump’s image has received a huge boost over the past hours.

He thawed relations with the red kingdom that had the world trembling with missile and nuclear tests. Modeling the event after the Nixon-Mao operation, Trump will try to present himself as the statesman who conquered the “Mission Impossible” of the third millennium. We are still waiting for details on the North Korean delegation’s actual concessions or promises.

Secretary of State Mike Pompeo has set complete and verifiable denuclearization as the high bar for the summit’s goal. Trump’s delegation also includes the hawkish John Bolton, his national security advisor and someone who has never believed in these negotiations. For now, Trump and Kim can bask in the benevolent spotlights; science fiction has come true. Later on, they will have to deal with reality.