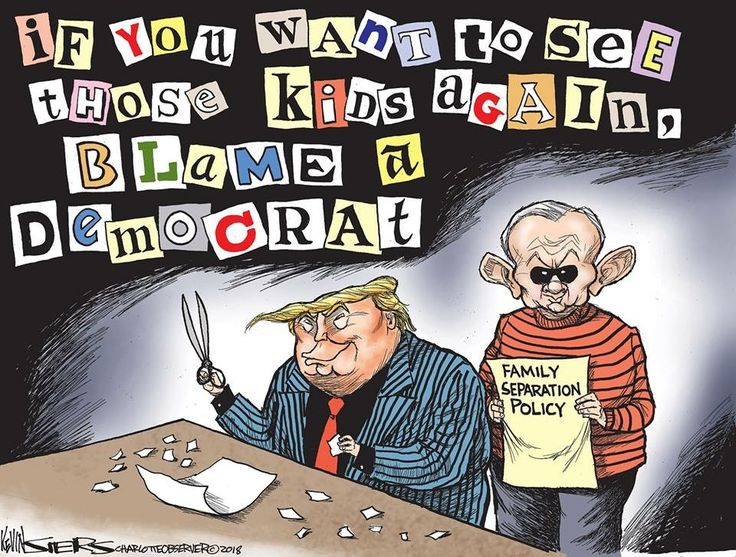 President Donald Trump has once again sunk to the depths of bigotry and resentment with his immigration policy. He’s now holding children hostage in the vain hope of forcing Democrats to make concessions on the construction of a wall between the U.S. and Mexico.*

Over the course of six weeks, more than 2,000 children have been torn from their parents after trying to illegally cross the border between Mexico and the United States. Obsessed with illegal immigration, the Trump administration has decided to take immigrants trying to cross into the U.S. to court, regardless of whether they are accompanied by children. Because of certain court rulings, these children cannot be sent to jail with their parents. The only other option, in this twisted logic, is to separate them.

Attorney General Jeff Sessions quoted from the Bible in support of this abhorrent, zero-tolerance policy. Even more disgusting, the verses he chose (Romans 13) were the same verses that were formerly evoked to justify enslaving black people in the U.S.

No government is immune to the problems brought on by illegal immigration. The Obama administration was also criticized for its increased use of detention camps at the border. Never for a single second did Democrats consider separating children from their parents.

Democrats increased visits and warning messages in Latin American countries in the hope of dissuading migrants from undertaking a long journey that would inevitably end in their being arrested at the border, but to no avail. As far as illegal immigration is concerned, zero-tolerance policies and their general message of dissuasion generate fairly moderate results. The message weakens as it diffuses over the span of a continent, to the point of dissipating altogether. And it does nothing to discourage the hundreds of thousands of people fleeing their countries in search of a better future.

Though it may be utopian to picture a world without borders — which some on the left are calling for — so-called civilized Western countries have a moral obligation to offer children the protection they are due given their immense vulnerability, and to treat immigrants with respect for their dignity and pursuant to international agreements.

With the exception of a few core disciples at the heart of the Trump administration, this decision has sparked general disapproval among Democrats and Republicans alike. Former first lady Laura Bush condemned the policy as immoral, not dissimilar to Japanese internment camps during World War II. United Nations Secretary General Antonio Guterres and U.N. High Commissioner for Human Rights Zeid Ra’ad Al Hussein have also deplored the policy as a cruel and intolerable practice that will leave children traumatized.

What about Trump? He’s turned himself into a shoddy caricature of Frank Underwood. He’s thrown the responsibility for this “horrible” fiasco onto the Democrats, blaming them for blocking reform on immigration policies, when, in fact, a directive from the president to the attorney general would be enough to put an end to this shameful episode unworthy of a democratic country.*

President Trump is using children as a bargaining chip against representatives and senators who oppose his larger immigration reform initiatives. Should we be surprised? This is the same man who has attacked his Western allies — Canada, England, South Korea and others — in order to commend the rigor of a Filipino despot and a North Korean dictator. This time he’s not attacking multilateralism, but the legacy of universal rights. His legacy will be marked by ignominy.

*Editor’s note: On June 20, 2018, President Trump signed an executive order that ends his policy of separating families by indefinitely detaining parents and children together at the border. The order was prospective and did not address the plight of children who have already been separated.