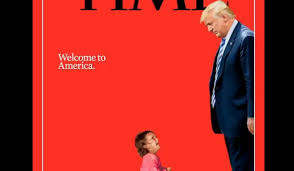 Trump signed an executive order halting the separation of children from their parents and putting a stop to their placement in separate detention centers as they cross the border. The cover of Time magazine, a photographic montage against a red background with the solemn phrase, “Welcome to America,” has become a symbol of the drama sweeping the globe. The sobbing little girl standing before the imposing figure of the most powerful man on the planet is Honduran. The 2-year-old child was photographed by John Moore, a Pulitzer Prize winning photojournalist (Getty Images) while she cried inconsolably, anxiously watching the U.S. immigration agent search her mother. The award-winning photographer tells the BBC about the overwhelming moment:

“I would have liked more time to speak with her, but I couldn’t,” he said. “She told me that they had come from Honduras and that she had been traveling for an entire month with her 2-year-old daughter.*

“The woman was about 30 years old, she carried her daughter in her arms. The patrol officers asked her to put the child down in order to proceed with her identification and to search her, and the girl burst into tears. I took the picture close to midnight, I had been with the patrol since three that afternoon. I had already seen how immigrants were chased with dogs and helicopters through the fields of reeds. I saw many things. I had to stop and breathe a little due to the emotion. I am a journalist and a father, I have two daughters and a 3-year-old boy. I know that separation anxiety is common among children of that age. This case made me see that situation taken to the extreme,” Moore said.*

Accompanying this is the story of Honduran girl’s father, who lives in Puerto Cortés. La Tribuna illustrates with moving photos the emotional moment in which the father of the little girl, Yanela Denisse Varela Sánchez, spoke with tears in his eyes: “Seeing the photograph of my daughter in Time magazine broke my heart. It just broke my heart. She is going through a very difficult situation there in the United States,” he said.* He explained how his wife, Sandra Maria, had always intended to pursue her dream. “She told me that she had plans to leave, but I warned her to think things through and not put my little girl at risk, because the situation and journey was dangerous, and more so going with a baby,” he said.* He found out that they were both in U.S. custody last Thursday, because some relatives who live there sent him a Univision report at 6:30 a.m. in which his daughter was featured.

He says that although he has a job in the port which enables them to live comfortably, he respects his wife Sandra’s decision to leave with their daughter in search of a better future. “It breaks my heart to be so so far away from my daughter and seeing her like that. Nobody had the strength to hold back tears, and it was worse seeing that image of my daughter. That upset me, but we have faith that everything will be OK,” he said. “I still haven’t had the chance to talk on the phone with them,”* and does not know how much money they had when they left. “All I know is that she went with a coyote. She didn’t work here, because she was a housewife and took care of our four children. It hurts me being away from my love,” he said.

Once again, the cover of Time magazine proves the Chinese proverb that “a picture is worth a thousand words.”

Author’s note: It should be mentioned that the photo was manipulated, as authorities confirm that the girl was never separated from her mother.**

*Editor’s note: Though accurately translated, this quoted remark could not be independently verified.

**Editor’s note: The Washington Post reported that the father of the girl featured on Time’s cover said the child and her mother were not separated and a U.S. Customs and Border Protection spokesman confirmed that the family was not separated while in the agency’s custody.