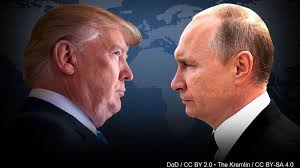 On Monday, Vladimir Putin and Donald Trump need to discuss very sensitive issues. “If I knew what would happen, I would not tell.”

No, the American president Trump is really not always friendly toward his Russian counterpart Putin. “We are harsher towards Russia than anyone else,”* Trump said on Friday afternoon at the press conference he gave with British Prime Minister Theresa May. And: “[In Russia] they’re saying: oh my, I wish Trump wasn’t the victor that in [the American presidential] election.”

The statements came after a stormy week in which Trump gave mainly Germany a thump on the nose: It would be a “captive” of Russia because its gas imports [from Russia] benefit “the Russian Treasury.” “How can you work together when a country gets its energy from the person you want to protect it from?”**

Will the summit on Monday in Helsinki between Trump and Putin be less simple than Trump expected beforehand? Prior to last week, Trump stated: “… I have NATO, I have the U.K. − which is somewhat in turmoil … and I have Putin. Frankly, Putin may be the easiest of them all.”

After this, Trump joined the NATO joint declaration, which, among others, condemns Russia for the annexation of Crimea and the poisoning of the Russian former spy Sergei Skripal on British territory. But apart from that, Trump provided the Russian president with a good week: The American humiliated his NATO allies by publicly chastising them about their defense budgets. With an interview in The Sun, he tried to torpedo the Brexit policy of British Prime Minister May. And he continuously demonstrated very clearly that he thought his stops in Brussels and the U.K. were just annoying delays on his way to Helsinki.

On Monday, agenda items include, besides international matters (Syria, Ukraine, nuclear weapons) also bilateral hot topics, like Russian meddling in the presidential elections in the U.S. and the American sanctions against Russia.

Whether all of that will bring fireworks in Helsinki depends on the question: Which Trump will actually come to the table? The president who admires and defends Putin, and who, with his coercive attitude, undermines Europe and thus plays into the hands of Russia? Or the Trump who grumblingly conforms to the official, antagonistic path of the American Congress and the EU?

That first Trump is, where Putin is concerned, much more present than the last. Trump sometimes even defends Putin at the cost of the U.S. Trump thus invariably trivializes the Russian meddling in the American elections. He proposed accepting Russia back into the Group of Seven leading industrial nations and, in the run-up to the NATO summit, spoke once again soothing words regarding his colleague: “You know President Putin is KGB … But you know what? Putin is fine. He’s fine. We are all fine. …”

Shortly before Brussels, Trump enraged European countries, with Ukraine in the lead, with the remark that he “would take a look at” whether the U.S. would stick to the international condemnation of the annexation of Crimea by Russia.

In doing so, Trump goes against his own government. Trump’s press secretary later stated that the official line remains that the U.S. condemns the annexation. Likewise, Congress continues to issue sanctions against high-ranking Russians and members of Putin’s government, and after the poisoning of former spy Skripal, the U.S. evicted 60 Russian diplomats. On Friday, right before the summit, the Justice Department in Washington announced that 12 Russians had been charged with hacking servers of the Democrats.

“Helsinki” is the first official meeting between Trump and Putin, but the two already shook hands in last year’s summer during the meeting of the leading rich and developing nations in Hamburg. They were having such a great time that their meeting ran late and Melania Trump had to be called upon to tear away her husband for a trip to the Elbphilharmonie. In the fall of 2017, they spoke again at an Asia summit in Vietnam.

But the exact nature of their relationship remains guesswork, as long as special counsel Robert Mueller has not finished his investigation into the contacts between Trump’s campaign team and high-ranking Russians, and as long as it remains unclear whether financial ties exist between Trump’s conglomerate and Russia. Trump’s business contacts with Russians date back as far as 1987.

What Putin aims at in Helsinki, he wisely keeps to himself: “We do not participate in Twitter diplomacy,” Kremlin spokesman Dmitry Peskov had already taunted in April.

That the Russians aim at a tentative rapprochement was revealed in the final declaration proposal that Moscow already sent to Washington last week. In it, reference is made to the need for dialogue and the improvement of the economic relationships. No wonder; Putin comes to the summit knowing that his entire circle of friends is on the American sanctions list. Even though he will not show it, it touches him personally.

On a number of fronts, the Russians draw clear lines. As such, the status of Crimea is non-negotiable and Putin will not be seduced into making a promise to refrain from Russian interference into American electoral processes. In doing so, he would indirectly confess guilt for earlier hacks.

Trump’s volatility makes him a more difficult conversation partner for Putin than Barack Obama was. But that volatility can also benefit Putin: The possibility cannot be excluded that Trump will recognize Crimea as Russian in a flash of friendly cockiness or diplomatic temporary insanity − just like he suddenly canceled the military exercises in South Korea after his meeting with North Korean leader Kim Jong Un. At least Putin would want nothing more.

And Trump? He said this about it on Friday: “We shall see.” And: “If I knew what would happen, I would not tell you.”

*Editor’s note: The original quotation, accurately translated, could not be verified. On April 3, at a meeting with the leaders of Latvia, Lithuania and Estonia, Trump said, “[N]obody has been tougher on Russia than Donald Trump.”

**Translator’s note: The original quotation, accurately translated, could not be verified. Trump said, ““We’re supposed to be guarding against Russia and Germany goes out and pays billions and billions of dollars a year to Russia.”