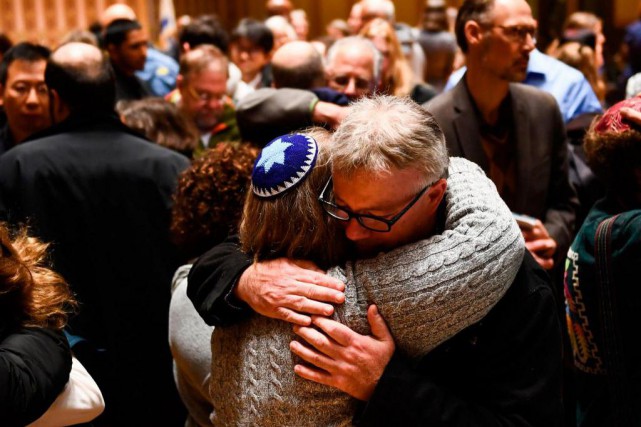 Lately, it seems to me that we go quickly from one thing to another. Undoubtedly, we prefer to move on. One massacre erases another. The accumulation of massacres makes them more mundane. They’re expected. Like how one hurricane makes you forget about the previous one once the human and material losses have been counted. What category was it? It’s never the last one.

I’m not fond of macabre prizes, but 11 human beings being assassinated in a Pittsburgh synagogue is not just “another American massacre” or the story of a crazy killer. It is the worst act of anti-Semitism in the history of the country.

Already, Donald Trump is accused of having created a climate conducive to the violent expression of anti-Semitism. I’m not so sure. The embers of American democracy have been smoldering with racial hate for a long time. Trump has exploited this, and part of his success comes from these coded calls to white extremists. When he says, as he did last Saturday, “I am a nationalist,” what one hears is, “I am a white nationalist.” When he calls the media the “enemy of the people,” what one hears is that they are the enemy of white people.

Those terms are used among the far-right American networks, where they resonate quite strongly, and Trump has aligned himself with too many members of the “alt-right” to plead innocence.*

However, placing all the responsibility for Saturday’s attack in Pittsburgh on Trump is too convenient. This hate crime is in line with several others that occurred under Democratic administrations.

Yesterday, some of us learned about the existence of the social network Gab, which claims to be the sanctuary of true freedom of speech in the United States. It is, in fact, the sanctuary of those who have been rejected by “traditional” social networks. Once banned from Facebook or Twitter for their violent or racist remarks, some turned to Gab, a place which calls itself anti-politically correct. It is, in fact, the meeting place for Nazis and other extremists. Since January, the presumed perpetrator of the Pittsburgh killings has been active on the site without any problem. “Jews are the children of Satan,” he wrote on his profile. There were several neo-Nazi allusions, like the number “1488” – 14 refers to the 14-word slogan “We must secure the existence of our people and a future for white children,” and 88 refers to “Heil Hitler,” because the letter “h” is the eighth letter of alphabet.

In The New York Times, the Gab site manager defended himself by saying that, thanks to Gab, the police were able to establish a motive for the killer’s crime. Without them, that evidence wouldn’t have been available!

For him, Twitter and other platforms prohibit hate speech, except when it targets “Trump, white people, Christians, or minorities who have walked away from the Democratic party.” In their minds, that is a legitimate target for hate.

The site is on its way to being taken down now that it’s associated with a criminal act of this magnitude. It was just as heinous on Friday.

Yet, did social media create this hate crime? Robert Bowers, the man arrested on Saturday, had been active on it since January. Was his murderous rage nourished and intensified there? Perhaps. And there is much to be said about the responsibility of these sites, those who host them, and those who allow their business – who have now, opportunely, cleared out.

But again, it’s too convenient to accuse the site, however detestable it may be. In a segment of American society, there is a nub of racial hatred, where anti-Semitism, anti-government feelings, hate for immigrants and sexual minorities all mix together in intellectual confusion.

A bloody thread connects Timothy McVeigh (33 years old, who killed 168 people in Oklahoma City in 1995) to Bowers and several others. McVeigh had read “The Turner Diaries,” an anti-Semitic science-fiction novel which tells the story of a civil war in the United States where white nationalists rebel against the government and trigger a nuclear war. The work dates back to 1978 and is easily accessible on official shopping sites. In Canada, it is considered hate-filled propaganda and is therefore illegal – it is also, notably, prohibited in France. According to articles published in The New York Times and The Guardian in 2000, it had already sold more than 500,000 copies 18 years ago. It is the modern equivalent of the restricted and shameful “Protocols of the Elders of Zion,” a fabricated text of a global Jewish plan that was, at the beginning of the 20th century, the bestselling book in the United States after the Bible.

This paranoid anti-Semitic text, mixed with other theories hostile to the state, also inspired Anders Breivik (32 years old) who killed 77 young people in Norway in 2011 because of Norway’s multiculturalism and kindness toward Islam. It also inspired Dylann Roof (21 years old), who entered a Baptist church in South Carolina in 2015 and killed nine black people. Indirectly, it also influenced Alexandre Bissonnette (27 years old), who killed six people in a Quebec mosque in 2017. Bissonnette had studied several massacres, particularly the one perpetrated by Roof.

This hate has deep roots that precede Trump – Bowers rebuked him in passing for being too lenient with Jews. Trump hasn’t done anything to combat this hate, he never has the words that he should, and he has even used racism for his own profit. But he did not create this hate and it won’t disappear after him, nor will it subside after his presidency, as long as it has anonymous fellow travelers.

*Editor’s note: The “alt-right” is an offshoot of conservatism mixing racism, white nationalism and populism.