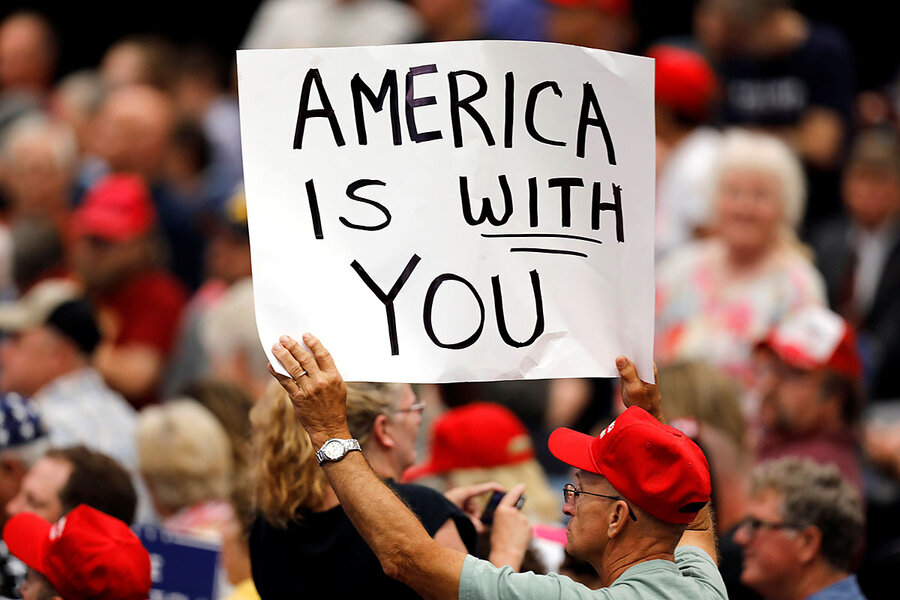 Perhaps his rhetoric and behavior are not as alien to American values and traditions as one might think. He connects with a way of understanding democracy as a democracy of the people.

It wasn’t necessary to wait for the results of the midterm elections to share the idea that Donald Trump is a disgrace to the United States and the ideas of freedom, progress and democracy that this country has represented ever since its birth. One has only to comprehend basic values that allow coexistence among human beings in order to detest Trump. But those who hate Trump less than they value the democratic system from which he emerged should analyze the sentiment expressed in the polls before they continue with the laments and insults.

The United States voted on Nov. 6 after a campaign in which both sides warned that it would be an extremely important date. Though voters were choosing the entire House of Representatives and a third of the Senate, as well as the governors of 36 states, Trump framed the elections as a referendum on him and his management of the country, and the Democratic Party accepted that approach.

The results showed an advance of the Democrats, who will have the control of the House of Representatives, although the Republicans improved their position in the Senate, the decisive chamber. The Republicans lost a few governors but they kept two states that are key for the 2020 presidential elections, Ohio and Florida. Almost all the candidates that Trump supported with his presence won, and the most emotional battles, in Texas and Florida, also fell on the Republican side.

The elections showed that the rejection of Trump isn’t shared by the large majority of Americans. Given the complexity of these elections and the multiple factors that influence the vote, it’s impossible to pin down the degree of support for the president. But it’s clear that Americans could have sent a clear chastising message to the man who embarrasses many of his fellow citizens, and yet, for some reason or another, they didn’t.

The conquest of the House of Representatives is important, as it will give the Democrats the opportunity to investigate the president’s finances and allow them to open an impeachment process against him. But at the same time, it’s very unlikely that Democratic leaders will use this mechanism, which has the potential to turn against the Democrats. On the other hand, Trump can operate with a degree of comfort in a climate of confrontation with the legislative branch. He can always count on the old technique of blaming the opposition for obstructionist practices that hinder his initiatives or force him to rule by decree.

So maybe Trump doesn’t have many reasons to celebrate, but his enemies have plenty of reasons to wonder how it’s possible that someone so heinous, who worships violence and openly incites hate, can be able to keep going, barely unscathed, in democratic elections.

In his first press conference after the elections, in between insults to journalists, Trump showed his pride in having been able to secure the triumph of several Republican candidates. Obviously, Trump is a multi-millionaire who doesn’t lack for contacts and resources, so he’s not exactly alone. But it is true that in this campaign he faced fire from former President Barack Obama; important leaders from both parties; actors, athletes and other celebrities; powerful businesspeople; famous innovators; and, of course, the media, except for Fox. For weeks, the main newspapers published dozens of columns asking − begging! − people to vote for any Democratic candidate, in any district. Out of patriotism, to put an end to this nightmare, for the future of American families, out of respect for the story of this great democracy … A list of good reasons, that people didn’t pay enough attention to.

Why? How can such a shameless figure have won the trust of so many Americans? Many reasons have already been suggested, and some are on the right track: the damage the 2008 crisis caused to the industrial belt of the country; the panic of the white minority after Obama’s victory; white people’s resistance to losing the privileges they’ve historically enjoyed. The fact is that for these and other reasons, there are more Trump voters than one thinks. As the writer Paul Theroux says in The Washington Post: “There are many loud Trumpers, but there are shy Trumpers, too. … I discovered that many in my large and lovable and liberal-minded family, and maybe yours too, revealed themselves as shy Trumpers.”

Perhaps one of the reasons for Trump’s success is that his rhetoric and behavior are not as alien to American values and traditions as one might think. It’s true that Trump isn’t a worthy occupier of the seat of Abraham Lincoln or Franklin Roosevelt, but he’s not so far from Richard Nixon’s temperament, lack of scruples and hatred towards his rivals. He can’t be identified with the intellectualism of Obama or Woodrow Wilson, but he does identify with Ronald Reagan’s populism.

More importantly than all that, Trump connects with a way of understanding American democracy as a direct, decisive democracy of the people, not the elites. A democracy led by “one of ours,” one like us. A democracy that has its roots in the history of the United States and that’s not just a right-wing approach − it’s shared by part of the left, as was seen in 2011 with the Occupy Wall Street movement. This is, by the way, a conception of democracy that’s also supported in places far away from the United States.

Democracy is a slow and boring system of government, with methods and rules that require long debates and annoying procedures to make difficult decisions with the greatest backing possible. It’s sometimes also a distant system, which we can’t quite understand and we leave in the hands of those who know how to operate in their complicated dark corners. Made up of complex practices for maintaining the balance of power, democracy sometimes also seems dysfunctional; it produces poor, unfair or contradictory results; and in extreme cases, it even gives birth to its worst enemies.

It’s easy, though dangerous, to confuse the problems of democracy with an excess of democracy − to justify its end − or with a lack of democracy − to justify direct, non-representative democracy. As much as they have been told this, Trump’s voters don’t feel like they’re feeding fascism, but rather perfecting American democracy, making it more direct, more American, tearing it from the hands of the elites to give it back to the people, embodied by a recognizable figure, a TV figure, a successful oaf, a normal guy, who enjoys life and makes mistakes like ordinary people. Not like corny Obama, the corrupt Clintons or those arrogant Hollywood, Silicon Valley or media cosmopolitans.

There’s no easy recipe to fight this simplistic and populist vision of democracy. But a first step must be that of recognizing reality, as harsh as it may be for progressives: “In rural America basic values like hard work, clear gender roles and the social fabric are dissolving before people’s eyes,” David Brooks warns in The New York Times. Trump represents, as James Miller explains in “Can Democracy Work,” some aspects of American democracy that are not often considered: “The attraction to demagogues that unleash the worst instincts among us, a certain racially contaminated nativism, resistance against the experts who may appear intimidating and against bureaucrats, who may appear bossy.”*

Those who have all those fears, those values and think that way also vote. We can spend two more years lamenting the disaster Trump represents, alien to the values we like, such as solidarity, compassing, diversity, civic responsibility and good manners, or think about what motivates those who don’t share these values to look for such radical, crazy options. If this isn’t resolved in time, Trump will stay in the White House after 2020.

*Editor’s note: The original quote, accurately translated, could not be verified.