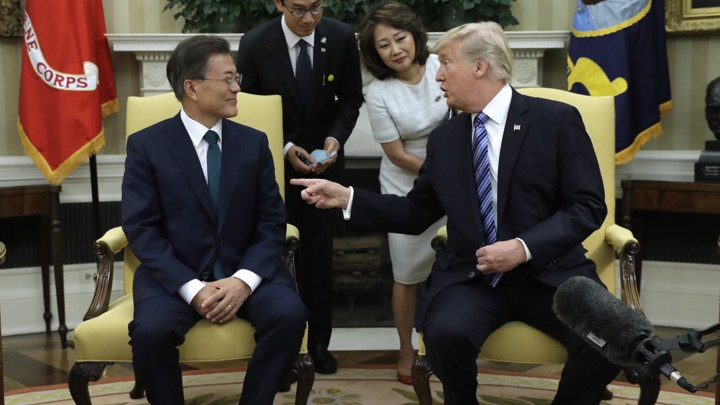 On June 30, after the 2019 Group of 20 industrial and emerging-market nations summit at Osaka, Japan, American President Donald Trump will meet with Korean President Moon Jae-in for a U.S.-Korea summit. It is predicted that Trump will make comprehensive demands encompassing many issues in security and the economy. Trump has shown himself to be cutthroat in trade talks with China, even going so far as to pressure allies like Japan and Australia for more compromises in the sharing of defense expenses and trade. There is no doubt that Trump will make the same demands of Korea. Korea must be prepared for President Trump to bring up demands that will be difficult for it to agree to, such as increasing its share of the expenses for the U.S. troops stationed in Korea, or a more proactive participation in Trump’s campaign against Huawei.

Although the issues with North Korea might be the top priority considering President Trump’s visit to the Demilitarized Zone, it is also possible that he will pursue more practical issues such as Korea’s share of joint defense costs. Although Korea’s share of the budget for the United States armed forces stationed in Korea had increased by no more than 4% each year previously, an unreasonable demand made by Trump last year increased it by 8.2%, making Korea’s total share of the budget about 1.04 trillion won ($890 million).

In addition, Korea has to negotiate with the U.S for the joint defense budget every year, instead of every 5 years. On top of that, the United States has already mentioned its hope that Korea will share the defense costs in the Strait of Hormuz, making it likely that it will ask Korea for money to protect oil transport ships going through the area. If the United States goes beyond simply asking for more U.S. investment from top Korean companies during the meeting on June 30 between Trump and Korean economic leaders, demanding that they also choose a side in the trade war between U.S. and China, the situation could become quite damaging to Korea. There was also a foreign press report that the U.S. had asked Korea to dispatch a battleship in order to protest China’s expanding influence in the South China Sea, making it a safe bet that they could also go further by making the blatant request of Korean companies to stop using Huawei equipment.

On his first visit to Korea in November of 2017 and on President Moon’s visit to Washington, Trump had already confused the Korean government by bringing up topics outside of the agreed-upon agenda, such as the topic of purchasing American-made weapons. Trump’s salesman-like pressure to pay more for matters of joint security and the economy must be debated point-by-point by stressing the contributions Korea has already made. The trade issues between the two countries can be worked out by pointing out the more balanced trade relationship since the reform of the U.S.-Korea free trade agreement, or by reminding Trump of the direct investments made in the U.S by Korean companies including Samsung, SK and Lotte, which totaled almost 40 trillion won ($3.42 billion) since Trump’s inauguration. Korea should firmly point out that the excessive demands made by Trump, branded as a means of strengthening the alliance between the two nations in handling North Korean denuclearization issues, may instead jeopardize the relationship between the U.S. and Korea. Korea must make President Trump’s visit an opportunity to improve the relationship between the two countries.