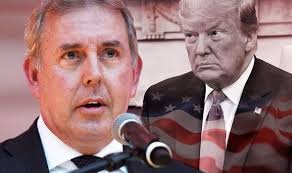 The president warns that he will no longer deal with Kim Darroch and insults him following the diplomat’s criticism of the Trump administration in leaked emails.

The leaked emails and cables from the U.K. ambassador in Washington are on the way to becoming a major diplomatic incident with the United States. On Monday, Donald Trump announced that his administration will no longer deal with Kim Darroch following the leaking of cables in which he described the Trump administration as “inept” and “dysfunctional,” among other criticism. Matters escalated on Tuesday, when the president insulted Darroch and also attacked Prime Minister Theresa May, putting considerable pressure on the future of this official in his post—in theory, having to stay there until late 2019—and issuing a serious warning to his future replacement.*

“I do not know the ambassador, but he is not liked or well thought of within the U.S. We will no longer deal with him,” Trump tweeted Monday evening, without clarifying how serious the fracture implied by those words would be as long as the United Kingdom does not remove Darroch. Moreover, Trump reveled in attacking the British diplomat on Tuesday, calling him a “fool” and “pompous.” “The wacky Ambassador that the U.K. foisted upon the United States is not someone we are thrilled with, a very stupid guy,” he said, adding, “He should speak to his country, and Prime Minister May, about their failed Brexit negotiation, and not be upset with my criticism of how badly it was.”

In spite of all the heat, Ambassador Darroch still has the support of May’s government, and claims that for the time being, he will stay in his post for the remainder of his term. “The PM’s view is that [Darroch] is a highly respected and dutiful public servant, and he has the full confidence of the prime minister,” said a Downing Street spokesman.

British Foreign Secretary Jeremy Hunt, who is engaged in a leadership contest with Boris Johnson for the Conservative Party, called on the U.S. president to react in a more traditional manner at the diplomatic level, in other words, go at each other’s throats but privately. Hunt tweeted: “[Mr. Trump] Friends speak frankly so I will: these comments are disrespectful and wrong to our prime minister and my country. Your diplomats give their private opinions to Secretary Mike Pompeo and so do ours!”

The British foreign minister emphasized that allies “need to treat each other with respect,” and challenged the leader by warning him that ambassadors are appointed by the government, and if he becomes prime minister, he intends to keep Darroch.

The ambassador’s raw view of the Trump administration was revealed after dozens of emails and cables were leaked. “We don’t really believe this administration is going to become substantially more normal; less dysfunctional; less unpredictable; less faction driven; less diplomatically clumsy and inept,” Darroch said in a 2017 cable published this weekend in The Daily Mail. The government official also mentioned the recent state visit of the whole Trump family to the United Kingdom. He said the New York native was “dazzled” by the pomp with which he was received, but that should not mislead anyone regarding his policy: “This is still the land of America First.”

Clearly upset, the Republican president passed the blame to Prime Minister May, claiming he “told her how to do that deal, but she went her own foolish way – was unable to get it done. A disaster!” The day before he had already spewed, “The good news for the wonderful United Kingdom,” he said, “is that they will soon have a new Prime Minister. While I thoroughly enjoyed the magnificent State Visit last month, it was the Queen who I was most impressed with!”

Darroch, a diplomat with almost 30 years of service, also disparaged Trump’s personal skills, which fueled the fire further in what has historically been a very close relationship between friendly countries. “You need to make your points simple, even blunt,” he said, despite acknowledging that Trump has a strong chance of being reelected. Trump may “emerge from the flames, battered but intact, like [Arnold] Schwarzenegger in the final scenes of The Terminator.”

*Editor’s note: British Ambassador Kim Darroch resigned his post on July 10, 2019 after this article was published.