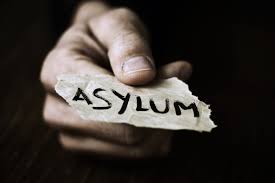 Once again Guatemalan President Jimmy Morales and his gang have demonstrated how servile, corrupt, deceitful and immoral they are. They humiliatingly and cheaply sold out Guatemala.

The images speak more eloquently than any words. Standing superior, Donald Trump gloats at seeing someone whom he views as inferior, i.e., Guatemalan Minister of Governance Enrique Degenhart, who is voluntarily selling out his country on the cheap and in a humiliating way, like it was a sewer into which Trump is preparing to dump what he considers human filth.

The extremely serious moral and legal problem is that the thousands of people affected are not the filth that Trump thinks they are. They are human beings with full rights. They are extraordinarily dignified fighters for the well-being of their families, and for their own. They are among the most courageous of people, having demonstrated the ability to overcome extreme danger and the risk of death. After all, they are the ones who succeeded in arriving, who left behind many who perished during the attempt. Neither Trump nor the cowards Morales, Degenhart, Guatemalan Minister of Foreign Affairs Sandra Jovel and their gang would survive an hour of what migrants have overcome all their lives.

For that reason, the first act that Jimmy, Degenhart and Jovel committed upon signing this agreement is immoral. They agreed with Trump. They yielded to the ignorant, racist vision of the U.S. president in which, according to Trump and his people – who are in fact human filth – one human is superior to another simply because the former has more money. Jimmy, Degenhart and Jovel sold their souls and their dignity for very little, submitting themselves to the caprices of a fascist like Trump, instead of remembering that the many thousands of children whom they sold out are Guatemalans, people of Central America, their brothers and sisters, who face danger, including the danger of death. With this, the Guatemalan president and ministers joined those who treat migrants like human filth that must be expelled to keep Trump’s country clean.

Legitimate crimes must involve due process, so that, one hopes, Guatemalan officials are punished according to law. Several judges, who, it appears to me, are answering the urgent call of their conscience, have already warned that this catastrophic agreement is constitutionally flawed. In my opinion based on experience, there is a very clear flaw in the agreement.

Throughout the signed document, Guatemala accepts a serious obligation to protect and house people who are transported to the country by the United States. Yet Section 5 of Article 8 says, “No provision of this agreement shall be interpreted in such a manner as to oblige the parties to distribute or commit funds.” Really? So where will the money come from to provide housing, food and security, and to implement the other provisions related to the protection of these people?

If Morales’ government acted with such enormous negligence and ineptitude when it was time to assist the victims of the volcanic eruption, something for which it has the budget and full legal responsibility, what will he do to assist those people for which he does not even have a budget? Or is this provision just a cheap ruse to get around what the Constitution of the Republic states in Number 3, Paragraph 1 of Article 171, in reference to the requirement that the Guatemalan Congress approve this agreement due to its high fiscal cost? In my opinion, this ruse is a fraud and violates Article 240 of the Constitution, which prohibits accepting obligations that have a cost without first identifying the source of financing.

About Nick Dauster 60 Articles
Nick Dauster has more than three decades of experience translating from Spanish texts in a wide variety of fields. He is certified by the American Translators Association for Spanish to English.