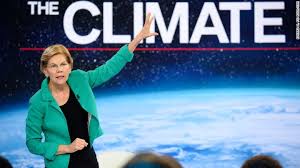 Ten Democratic candidates presented their positions on how to fight climate change on Wednesday, Sept. 4, during a marathon CNN broadcast. Introducing a carbon tax in the U.S. and shale oil were just two of several different points of contention. Energy conservation or lifestyle changes, however, were largely ignored.

The candidates were certainly aware of the issues, but their solutions to the crisis were far from forthcoming. The very fact that CNN broadcast this debate is proof that climate change is now an established item on the agenda in the United States. CNN devoted seven hours of the debate to the “climate crisis,” which involved a series of question and answer sessions between concerned citizens and the 10 candidates vying for the 2020 Democratic presidential nomination. A long discussion of the weather forecast as Hurricane Dorian approached the shores of the southeastern United States lent further drama to the topic of the hour.

The debate wasn’t about challenging the reality of climate change. Unlike Donald Trump, the Democratic nominees have all declared their trust in climate warnings and science. “I may be old-fashioned, but I believe in science,” assured Joe Biden, former vice president to Barack Obama and a strong performer in opinion polls.* While left-wing Democrats have got people talking about their “green new deal,” an ambitious program deemed unrealistic by some, other candidates think differently about the zero carbon target. “By 2028, we don’t have any more new buildings that have any carbon footprint. By 2030, we do the same for our cars and trucks. By 2035, we do the same for our electricity generation,” Elizabeth Warren explained. Sen. Bernie Sanders and Joe Biden are both aiming for a 2050 target.

At this stage, the introduction of a carbon tax in the United States and continued oil and shale gas exploration appear to be the issues that are polarizing the candidates the most. Biden was the most cautious, calling instead for a return to collective and diplomatic negotiations after the U.S. withdrawal from the Paris climate accord. “Even if the U.S. did everything perfectly, it still only accounts for 15% of the global problem,” he repeated several times. Warren has argued for a carbon tax to be introduced instead.

The impact on household purchasing power was barely discussed, but employment is one of the candidates’ main priorities, especially for coal mine or oil well workers, who “should not be punished,” said Sanders. All the candidates highlighted the opportunity of the energy transition to create “millions” of jobs. Energy conservation and lifestyle changes were hardly mentioned at all. Sanders was the only one to bring it up, despite the fact that the U.S. is one of the most air-conditioned countries in the world—it has a quarter of all the air conditioners in the world—and could also be a net exporter of oil by next year or 2021.

Donald Trump invited himself to join the debate by launching some furious tweets criticizing “fakenewsCNN,” claiming that the Democrats’ programs would drive up energy bills and oil prices. Trump has just launched a new anti-environmental policy against LED bulbs, which consume less energy. “This is exactly what the fossil fuel industry hopes we’re all talking about. They want to be able to stir up a lot of controversy around your light bulbs, around your straws and around your cheeseburgers,” Warren warned, repeatedly referencing Washington’s “corruption.”

In the first nuclear country in the world (with 100 reactors that produce 20% of its electricity), nuclear energy is no longer the answer, according to Sanders and Warren, while Biden said he was open to new technology. Sanders added that it “doesn’t make a whole lot of sense to me to add more dangerous waste to this country,” also pointing to the cost of new nuclear plants, while Biden stated that he’s relying on scientists to improve the performance of renewable energy storage systems.

*Editor’s note: This quote, attributed here to Joe Biden, may have been misattributed, and appears to have been said by candidate Sen. Bernie Sanders.