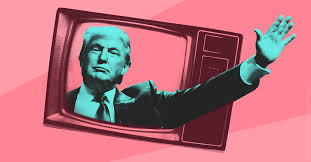 While the Democratic Party is still looking for its three main candidates, the president is already keeping his eyes on the prize; since Jan. 20, 2017, in fact. Just after he took office, he registered his reelection campaign with the Federal Election Commission.

And rightly so. None of the gaffes that offended old allies (like the last slip-up on the invasion of Poland), none of the lies (more than 12,000, according to The Washington Post’s count), none of the acts showing carelessness or even incompetence (for instance, the sharing of a classified picture of an Iranian site that disclosed American military satellite capacity … which was also top secret), none of all that seems to have rattled the president’s electoral base.

According to Gallup, Donald Trump’s approval rate stayed higher or equal to 50% in 17 states this year, and he has more than a 40% approval rate in the key states that contributed to his election (Michigan, Pennsylvania and Wisconsin), in the densely populated states which he won (Texas, Georgia and Louisiana), and also in the traditionally purple states – the uncertain states that do not have a party preference – that he won (Florida, Ohio, North Carolina, Arizona and Iowa).

Trump has already held rallies in some of those states that feel like campaign rallies. His obsession over Alabama in the now famous #Sharpiegate, related to the disputed trajectory of Hurricane Dorian, makes sense in the light of his approval rate of over 60% in that state since his election. The president has never quite stopped campaigning, because deep down, this reality show is what he likes to do the most in the political arena.

But he could be on increasingly thinner ice this fall. The new tariffs on Chinese products imposed by the administration will be costly to American households — up to $1,000 per household, according to an estimate (considered to be quite conservative) from JP Morgan. American consumers are paying the price of the commercial war, according to a study by Amiti, Redding and Weinstein and published by the Center for Economic Policy Research. The study estimates the contraction of real American income to $1.4 million per month.

The agriculture sector has also taken a serious hit due to this trade war, and has also suffered as a result of federal decisions such as the EPA ruling on ethanol, leading to economic consequences. (The number of bankruptcies has increased considerably). There have also been human consequences. (The rate of suicides has rapidly increased.) With respect to coal miners, who are part of the president’s base, there have been advantages for mine owners, since the workers are directly impacted by the increasing number of mines that are shutting down because of the competition with natural gas and renewable energies. While the solvency of miner pension benefits is on the verge of ruin, Trump has stayed silent and has not put any pressure on Congress to adopt the Miners Protection Act – their only lifeline.

Now, this data is critical in an election year, and a survey conducted by the Pew Research Center reveals that the economy is among American’s top priorities in 2019, even before education and health care costs. The famous slogan from the Bill Clinton era, “It’s the economy, stupid,” could very well make a comeback.

Therefore, is it important for the president seeking reelection to find a way to show that, in spite of everything, he can seal the deal. But we know now that North Korea has actually increased its development of nuclear power, the Middle East deal might not happen, China is not kneeling, and U.S. allies, far from impressed with the power struggles instigated by America’s president, are looking for other answers besides Pax Americana. We also know that the public debt as well as the trade deficit are increasing. Thus, during the next 12 months, the president must show that his campaign catchphrase “Promise made, promise kept” does not ring completely hollow.

There is only one visible concrete thing, something that is easy to sell in an election year, a colossal project that scandalized the public in 2016 and that can easily pull voters’ strings about a subject they care about: immigration, even if, as we know it, the American people will be the ones paying for the wall (and not Mexico, another promise).

The candidate president apparently cannot stop hammering it home at the White House: The wall must be built by 2020. However, after 2 1/2 years in office, the president still has not built this “big, beautiful wall.” The U.S. Army Corps of Engineers has merely renovated 96 kilometers (approximately 60 miles) of existing border infrastructure. Even the prototypes built with a flourish at the Californian border have now been demolished.

That is why the Texas and Arizona building projects are suddenly being expedited. That is why waivers have been used so extensively to bypass laws that the border is almost a lawless region. That is why he even promised to pardon civil servants who break the law to speed up construction. That is why he decided, in an attempt to circumvent Congress, to siphon off $3.6 billion from the defense budget, funds designated for rebuilding structures affected by mold or hurricanes (as in Puerto Rico), building port infrastructures or cybersecurity facilities, arguing that border safety must prevail.

We have to keep the following in mind: During the next 12 months, the ends will justify the means. There are 422 days until the election, and the White House still has the power play advantage.