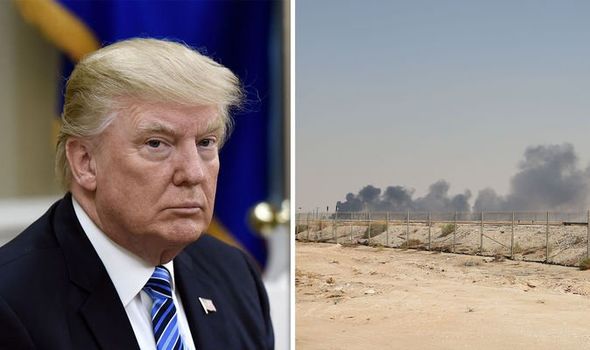 It can hardly be proven whether Iran is behind the attacks in Saudi Arabia. But the U.S. president seems, in any case, unable to produce an adequate answer.

When Donald Trump swings a golf club at his luxury resort Mar-a-Lago, he sometimes seems more on-target than when he tries to put his politics into words. So when the U.S. president, as the commander in chief of the U.S. military machinery, announces in the Oval Office that he is “locked and loaded,” the alarm is raised in other areas of the globe, too. Will this president preserve the peace after the spectacular air raids on the heart of the Saudi oil industry? Will he govern convincingly, and yes, with enough intimidation, to live up to the claim that Washington will continue to ensure security in the Persian Gulf, and thus for much of the world’s energy supply?

There’s no answer for that until Trump acts. What is clear is that what happened in Saudi Arabia can hardly be overestimated. Nearly 20 drones and missiles hit the kingdom’s biggest refinery, and as a result, the output of the globe’s third-largest oil producer collapses, oil prices increase worldwide and a group of barefoot Shiite militants from Yemen, completely unknown to most people, accepts responsibility for this global thunderclap. And then the attackers threaten to punish the hated rulers of the neighboring country if they do not immediately end the war in Yemen.

The Houthis in Yemen are angry with the Saudis because of the campaign that these neighbors began in 2015, under which the Yemeni people have suffered greatly. But that does not explain the brazenness and effectiveness of this attack. The Houthis may currently control part of Yemen, the poorhouse of southern Arabia, but they are no high-tech military power. Either they themselves did not actually attack, or they borrowed drone expertise from consultants of a modern power. Hence, there is obvious suspicion that the Islamic Republic of Iran had a hand in the events as the Houthis’ patron.

Tehran of course sees the Yemeni rebels as an instrument to carry out a targeted, but unrecognized, regional political program against Saudi Arabia, and thus against the U.S. The Houthis create influence in Yemen for the Shiite power of Iran, similar to what the innumerable Shiite parties and militant groups in Iraq, Afghanistan, Lebanon or Syria have already been doing in those countries for a while. There is almost never watertight evidence for it. Tehran may be a suspect, but it will be difficult to convict. Such stealthy aggression is not an Iranian deceit; it is a concept of practical politics that is common throughout the Middle East.

There Is Unlikely To Be Clear Evidence for Iran’s Participation

Now, as the conflict with the U.S. – an existential conflict for the Islamic Republic – escalates, groups like the Houthis are the ideal weapon with which to hit the U.S. where it hurts, by attacking Washington’s political friends with the help of the Yemeni fighters, or at least with their name tag. Saudi Arabia, the eternal rival for dominance in the Persian Gulf and competitor for political leadership in the Muslim world, is a U.S. ally. But the kingdom is also vulnerable. The complete failure of its air force says almost everything there is to know about its self-defense capabilities. And that is so despite Saudi Arabia having been heavily armed by Washington for decades.

U.S. experts will now evaluate thousands of satellite images and mountains of data. But it will likely be very difficult to find any convincing evidence that can be presented to the global public (especially because American credibility in presenting evidence has suffered greatly since the war against Saddam Hussein). If the Iranians really had a hand in it, they will have taken care to leave no trace. After all, the regime has been fighting for survival since Trump renounced the nuclear deal with Iran and revived the sanctions program. Iran is in shambles, politically as well as economically. The rulers of an oil state that now can hardly export any oil have little room left in which to maneuver. Given the opposing power centers of spirituality and security forces, the population explosion and water shortages, the Islamic Republic has enough problems, even without Trump.

If Tehran did try to draw a line in the sand for the U.S. with the help of the Houthis or another Shiite militant group, the message would be unmistakable: The U.S. can attack, but it will pay a heavy price. Dealing with this asymmetrical means of waging war as the leader of a superpower requires more tactical intuition than one can expect from a Trump.