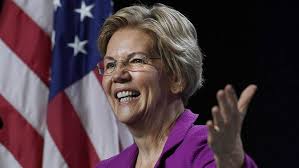 The impeachment process initiated against Donald Trump is a turning point for the upcoming presidential election. So far, Democratic presidential candidate Elizabeth Warren is the one making the most of it.

At the end of his second term in office in the summer of 2000, Bill Clinton reportedly brought together his closest aides at the White House, according to accounts from one of his advisers. He wanted to express to them his regrets, if not his apologies. The Monica Lewinsky affair and the impeachment process it triggered had not allowed him to dedicate himself to his international responsibilities as he should have done.

What can one say then today about a new impeachment proceeding, the third one in U.S. history, that threatens the improbable presidency? On Tuesday Oct. 1, the contrast could not have been greater between images coming from Beijing and those from Washington. In Beijing, China triumphantly celebrated the 70th anniversary of the creation of the People’s Republic with martial splendor despite the storm clouds hanging over Hong Kong. In Washington, the United States delved a little deeper into the twists and turns of “Ukrainegate.” The Monica Lewinsky affair broke at a time when America was unrivaled in a unipolar world. Such is not the case today, with the rise of China, and the return of Russia.

Does the Zelenskiy affair show the strength or weakness of democracy, or does it reflect a paralyzed system based on the balance of power? A bit of both, no doubt. President Trump’s attempt to blackmail an ally by suggesting that it would not receive military aid unless it helped Trump undermine a political rival is so extraordinary that it fully justifies impeachment.

Since the beginning of October, “Ukrainegate” has already weakened the prospects of two people: Trump, who, by violently thrashing about like an injured animal, no doubt makes his own case worse, and Joe Biden, even though he is blameless in this affair.

Trump: An Engine Driving the Demise of His Party

Only one person seems to have benefited so far from “Ukrainegate:” Democratic candidate Elizabeth Warren. She is also benefiting from the fact that Bernie Sanders, her rival on the party’s left, has had to pull back for health reasons, temporarily or possibly otherwise.

Of course, it is important to remain very cautious. This author made a serious mistake by not seeing Trump’s coming victory in 2016. And the next campaign is just beginning. However, at the moment, I am tempted to say that, although I can’t predict who will be the next president of the United States, it won’t be Trump. Public opinion is naturally changing. But we can see some emerging trends. In a survey published a few days ago, Warren was leading Biden for the first time. Is the Democratic Party, sensing Trump’s new vulnerability, rallying behind a candidate who, with her energy and her physique (despite being 70)) makes the man in the White House look almost old, unlike Biden, who makes him look almost young? Even more troubling for Trump is the fact that the Republican Party, which has been loyal even if it has had to hold its nose, is beginning to show signs it will desert him. What if, despite the loyalty of his base, Trump is turning into an engine that will drive the loss of the entire Republican Party?

Just a week ago, most commentators warned the Democratic camp against impeachment. The impeachment procedure is undoubtedly justified in terms of respect for democratic principles, but politically it is too great a risk for the party. The majority of Americans, they said, would see it as nothing more than a political maneuver, analysis supported by early polls. But this is no longer the case today. Public opinion has changed. The affair has become much more spectacular, with new developments each day, just like a television series that viewers reluctantly become addicted to. Who knew what? Who did what? In short, just how widespread is the scandal? Compared to the Russia scandal, the Ukrainian affair seems easy.

Elizabeth Warren: Too Far to the Left?

The prevailing feeling is that we are only at the beginning of the affair and the pace will inevitably pick up. The question is not yet whether the incumbent president will be forced to resign, as Richard Nixon did in 1974, but whether Trump can survive politically in 2020.

What remains to be seen are the political and even more so, the economic possibilities of the woman Trump calls “Pocahontas,” Sen. Warren. Is she too radical, too left in her vision of capitalism? In other words, how could a candidate, whose economic thinking sometimes seems similar to that of Thomas Piketty, become president of the United States? Is this radical approach merely a pretense? Is it merely the expression of left-wing populism, intended to allow her to win the nomination of a party that has become distorted over the years? Will she refocus once she has been nominated? Will she prove herself by choosing a much more moderate and, incidentally, much younger personality as her running mate? Such a change of course is not that simple.

With just over a year until the 2020 presidential election, many American voters are potentially facing a difficult dilemma. Should they endanger their liberal economy and personal interests by electing a woman who promises, among other things, to spectacularly increase taxes on the very rich? Or should they resign themselves to putting the future of the United States’ democracy in danger by accepting the reelection of a man so clearly unable to calmly and competently perform the duties of president? If there is nothing more to hope for from Trump, is there anything to fear from Warren? For America, as for the world, the Warren risk is undoubtedly smaller than that of a second Trump presidency.