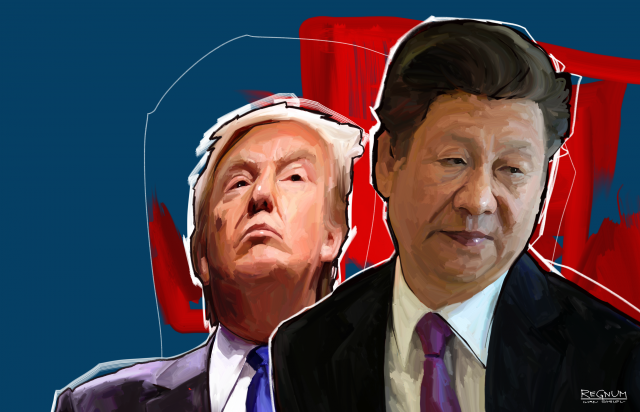 Of course, this is only my opinion, but the price for Donald Trump refraining, even temporarily from raising tariffs on imports from China, may be that Trump gets incriminating evidence on Joseph Biden. But what if this is not entirely unreasonable?

Some sources in American think tanks familiar with developments in applied social psychology have the following way of characterizing one of the techniques for external control over individual behavior. One of the main methods of suppressing morale through a deterrence strategy, they say, is to strictly observe the following tactics: You need to keep a person in a state of uncertainty about his current situation and what he can expect in the future.

Who said that such measures are not applicable to organizations, including governments? Moreover, governments are also ruled by people. A couple of days ago, the world’s media spread the following news: If the United States and China have not yet agreed to end the trade war, they have suspended it and are now waiting for the Chilean Asia-Pacific Economic Cooperation summit scheduled for Nov. 16 and Nov. 17, at which the parties expect to sign a comprehensive agreement.

Really? Maybe, maybe not. After all, we have repeatedly witnessed initially inexplicable zigzags in the negotiation process that swing back and forth. Donald Trump and Xi Jinping spoke at the end of last November following a sideline meeting at the Group of 20 summit of industrial and emerging-market nations in Argentina. The comprehensive agreement appeared to have been signed at the end of last April, but then everything suddenly changed. The U.S. arrested the financial manager of Huawei – daughter of the company’s founder – in Canada the next day, allegedly for having ties to Iran. Beijing suddenly was falsely accused of conducting an unauthorized review of the draft trade agreement. This led to the imposition of import duties within 10 days, and five days later, to a new shameless conflict when the U.S. banned exchanges with Huawei and the blacklists allies of this information technology giant. This is the classic ambiguity of trade war.

Things continued to develop in a similar fashion. At the end of July, the Shanghai round of trade negotiations, which Chinese Vice Premier Liu He led with U.S. Trade Representative Robert Lighthizer and Treasury Secretary Steven Mnuchin, ended in failure. In October, the Chinese delegation arrived in the United States for the next round of negotiations, which was held in anticipation of the next tariff increase announced by Trump on Oct. 1, but which was then moved to Oct. 15 as a goodwill gesture so as not to overshadow Beijing’s 70th anniversary celebration of the founding of the People’s Republic of China. The negotiations that began on Oct. 10 with the deputy heads of delegations failed, and China’s representatives, foreseeing a similar finale with the participation of top officials, went home, vowing to leave the United States on Oct. 13 and and threatening to bypass the second day of talks. But then everything suddenly changed.

Liu, having received an invitation to speak with with Trump, left the delegation in the United States. The parties announced the basic outline of a compromise, the allegedly specific details of which were quickly reported by the media. China agreed to purchase $50 billion worth of agricultural products per year. The next day the White House announced that this promise was already being fulfilled, and refrained from raising tariffs on Oct. 15 as previously announced. At the same time, the issues of protecting intellectual property and provision of state subsidies to industry, especially the high-tech sector, which Washington had complained about to Beijing, disappeared from the agenda.

Meanwhile, if you remember, the five-point ultimatum that the American delegation brought to Beijing a year before the trade war took effect in May 2018 required China to give up its sovereignty and agree to completely surrender to the point of becoming a colony. The ultimatum further banned China from investing in high tech industry domestically, and ordered it to lift its ban on American investment in China. In other words, the U.S. demanded that China transfer its high tech sector to the Americans.

At the same time, in the alleged compromise, additional negotiations were required before the agreement could be signed. The fact is, the United States is not refusing to tighten tariffs, but is deferring the matter for two months until Dec. 15 and has stipulated to a full agreement in Chile. This stipulation was voiced by Mnuchin. But what if, on the eve of the Chilean APEC summit and the meeting between President Xi and President Trump, something happens that makes signing the agreement impossible? Or what if something happens after an agreement is signed that invalidates its terms and turns it into a meaningless piece of paper? There will be no surprises in this case; there will only be a sense of déjà vu. The uncertainty of trade war will cause Washington to shrug and impose new tariff sanctions, transferring responsibility for this from itself to China.

Indeed, at the same time President Trump was praising officials with respect to a meeting with Liu, he had already told the American public how the United States is getting rich thanks to anti-Chinese tariffs. And in the meantime, the world learned about the World Trade Organizations’ findings that Washington was entitled to anti-European sanctions. It turned out that Trump was right, and the WTO, set up to make sure world trade operates according to certain generally accepted rules, is not only authorizing a deviation from these rules, but approving their open and cynical violation. Indeed, do not believe everything you hear.

How does one interpret this combination of kindness to China and hostility to Europe? One can interpret it as an attempt to drive a wedge between Beijing on the one hand, and Brussels, Berlin and Paris on the other; to strangle trading competitors one by one, and prevent them for forming an alliance. The WTO is completely dependent on America, and since this dependence has been there from the start, all the stories one hears about how impartial world organizations set uniform rules for everyone are meaningless. It is just like George Orwell’s “Animal Farm” where all animals are equal, but some of them are more equal than the rest.

Will everything turn out exactly as I’ve described, and if so, then why do I say at the beginning, “maybe, maybe not”? It is not enough to know the parties’ trade and economic motivations. When we see political swings like we are currently seeing, and when one of the parties makes unimaginable leaps, this is a sure sign that the situation is by no means determined by the economy, but that it is purely political.

There are two points to consider here. One is the situation surrounding the alleged persecution of Uighurs in Chinese Xinjiang. In the wake of more than two dozen signatures on a petition to the United Nations Commissioner for Human Rights, Washington raised this issue in July in the midst of the anti-Chinese tariff hysteria. Now, in early October, the situation is repeating itself and the United States has introduced measures against 20 organizations and eight Chinese companies associated with Chinese public security agencies. The Uighur situation is occurring at the same time that trade negotiations are taking place between China and the United States. The Uighur issue arises not only when Washington needs to put pressure on Beijing, but when it represents its own selfish interests.

There is a second point to consider. Against the background of preparing for the fateful round of negotiations, which ended with an audience of Liu and Trump, the United States casually requested that China finally deal with the Biden case. More precisely, the situation involves former vice president and current presidential candidate Joe Biden and his son, Hunter, whose law office received $1.5 billion in 2013 from a certain Chinese organization. This is precisely the point at which the issue is not just political but enters the arena of the American presidential election. The question is how and what Trump is ready to do in order to take down and eliminate his opponent and win reelection in 2020. Something suggests that he is ready to do a great deal. Most importantly, from the point of view of both Chinese and Russian interests, I must admit that sympathy in this case favors Trump, not Biden.

Of course, this is only my perspective, and the refusal to negotiate may be temporary. By raising tariffs on Chinese imports, the White House, or more precisely, Trump, may be able to get incriminating evidence about Joseph Biden. But what if it is reasonable? Then, regardless of how China sees things, there is a very traditional conflict going on in the U.S., something we remember from the eve of the collapse of the USSR. When political opponents in struggle for advantage over one another begin to appeal and resort to international support, this is a sure sign of a serious domestic crisis. This may be the initial phase of its disintegration, but events in this kind of case tend to develop exponentially and snowball. Whether it is good or bad for Washington to have these kinds of problems is another difficult question. In order to consider the possibilities of the trade agreement, considering the possible gains and risks to both countries when an agreement is reached, it is at least necessary to recognize importance of the Biden probe. At this stage, the process is still ongoing.