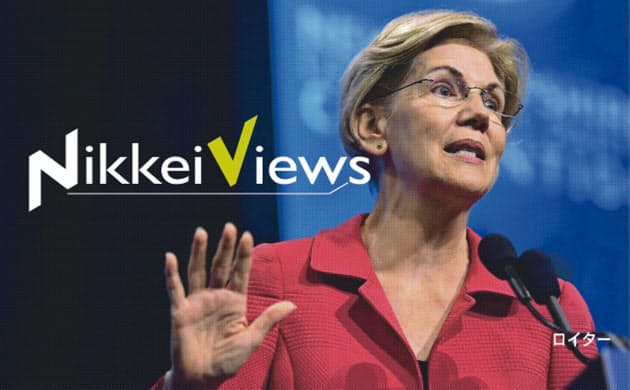 In America, the motherland of shareholder capitalism, a harsh wind is gaining strength against shareholders. In mid-August, the Business Roundtable, a gathering of American businesspeople, revised its core principles for the first time in 22 years. It adjusted its previous position on shareholder primacy and promoted stakeholders instead, emphasizing other relevant groups such as customers, employees, suppliers and communities.

On the political side, Sen. Elizabeth Warren, who is polling at the top of Democratic candidates in the 2020 presidential election, is leading this movement despite having no connection to it. She supports the Accountable Capitalism Act, which would rectify the distorted aspects of capitalism. Among its provisions are one, that at least 40% of the boards of directors be worker representatives, and two, that the stock-related earnings of businessmen and administrators be significantly restricted, severing the interests of businessmen from those of shareholders. If this became law, there is no way of knowing what its impact would be.

Warren is also pressuring the powerful businessmen who make up the Business Roundtable to turn their words into action. She sent a letter to the heads of 10 influential companies, including JPMorgan Chase & Co., Amazon and AT&T Inc., which signed onto the new principles, stating “If you… plan to live up to the promises you made, I expect that you will endorse and wholeheartedly support the reforms laid out in the Accountable Capitalism Act … I ask that you respond … no later than Friday, October 25, 2019.”

Meanwhile, the United Auto Workers launched a strike against General Motors factories in mid-September. There is a wide gap between labor and management over issues such as plant closures, and the strike has dragged on.* This is the first GM strike in 12 years, and the first strike following the shock of the Lehman Brothers bankruptcy.

There are reasons for the series of counterattacks from the public on shareholders and capital. It is a case of distorted distribution. According to Warren, in the early 1980s, less than half of the profits of major companies went into shareholder return; the remainder was reinvested, went toward wage increases, and so on. Now, though, 93% of profits go to shareholder return. What’s more, the upper 10% of the income bracket owns 84% of stocks, while the bottom 50% of society barely owns any. The result is that the wealth gap has widened with tremendous force.

Yet, even if this sense of crisis is understandable, if the kind of pluralistic “stakeholder primacy” Warren and the Business Roundtable are trumpeting actually comes into play, would it resolve the problem?

One should remember the case of the former Japanese National Railways. While its behavior might not have been considered perfect from the perspective of stakeholder primacy, it would have received a fairly good score. First of all, from an environmental point of view (with the exception of local lines, which have extremely few passengers), it emitted far less carbon dioxide than other modes of transportation, such as passenger cars, trucks and airplanes.

JNR was also nice to workers – or rather, labor unions were strong, and most of the railway’s attempts at regulation ended in failure. The number of JNR employees in 1980 (414,000) had barely decreased from 1965 (460,000), in spite of the company drowning in debt and its accumulated losses, which snowballed.

JNR’s relationship with passengers was nuanced. Besides the riot in 1973 at Ageo station in Saitama Prefecture by passengers who were irate at the confusing train schedules caused by the so-called lawful strike, JNR earned their displeasure in 1976 when it raised fares by 50% in one stroke to cope with the expanding debt. On the other hand, it supported indebted local lines that could not get their balance sheets in order, and it’s fair to say that it contributed to provincial society and the residents along those lines.

The country and its citizens that owned JNR were the ones most disadvantaged by the railway. By the time of its decline in the 80s, it was running a regular annual debt of 1 trillion yen, with a final bill of 24 trillion yen for citizens. Individually, this worked out to about 240,000 yen per person.

Because JNR was a public company, its products were good for the environment, and it was a comfortable place to work. Many customers were dissatisfied with its fares and service, but for a long time, there were regular passengers (those on the local lines) who thought they couldn’t live without the railway. But its balance sheets were atrocious. Its stock inevitably turned into wastepaper, and it had no value for the shareholders who owned the company (that is, the country).

From the perspective of shareholders who judge the value of a company by the size of its profits, the conclusion was simple: there was no value in this kind of company, so it had to either be reformed to improve its earnings or, if that was impossible, file for bankruptcy. (The real JNR was broken up, in essence a form of bankruptcy.)

However, if pluralistic stakeholder primacy had been applied, the evaluation would not have been simple, and it might have devolved to the point where it would have been impossible to judge whether the company was good or bad. We feel that while the idea of stakeholder primacy may be attractive, there are many problems with how it is applied in the real world.