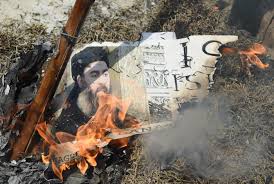 Are we on the verge of a new phase in the almost never-ending conflict in the Middle East?

Suddenly, without any prior warning, news streamed in from Washington about the death of Abu Bakr al-Baghdadi, the fugitive leader and founder of the Islamic State, and three children in an operation carried out by American special forces in the Syrian province of Idlib.

At the same time, President Donald Trump emerged to confirm the special operation in what he described as a major victory over the extremist organization, which, in recent years, has terrified the world with its bloodthirstiness and brutality, and which controlled vast territory in Syria and Iraq at the height of its power under al-Baghdadi’s leadership.

It seems that this operation, which killed the leader of the Islamic State group, will have repercussions in the Middle East and around the world that can be summed up as follows:

1. The loss of the extremist group’s leader will result in more weakness and disunity within the structure of the organization, which has suffered a decline in influence, especially following its expulsion from Mosul and Raqqa in 2017. A few years earlier, in 2014, the Islamic State group captured large swaths of Syrian and Iraqi territory in a major surprise to the world, spreading terror everywhere and governing through brutal methods that shocked everyone;

2. The operation to eliminate al-Baghdadi represents a major milestone in international efforts to combat terrorism, and will provide momentum for the complete destruction of the last remnants of the Islamic State group. On the other hand, it could also mean that the Islamic State group will plot various kinds of reprisals in response for the killing of its leader. Here we are talking about bombings, assassinations, and subversive operations, which the Islamic State group has a long history of carrying out in numerous cities around the world;

3. The agreement will hold in Syria, and fears about the consequences of the recent Turkish military operation, which Recip Tayyip Erdogan carefully planned, will subside. That will mean success for the idea of establishing a safe zone after al-Baghdadi’s death, resettling 2 million Syrians there, and securing the Turkish border from Kurdish fighters;

4. For Russia and Iran, two supporters of the Bashar Assad regime, al-Baghdadi’s death means the elimination of their strongest opponent on the ground, and his death will pave the way for the implementation of their plans with Assad and the initiation of further negotiations on the future of Syria, particularly with Washington and Ankara;

5. As for Trump, he is the biggest winner, especially in terms of domestic politics. The success of the al-Baghdadi raid will strengthen Trump’s position against the House investigation into his conversation with the Ukrainian president about damaging Joe Biden, his Democratic opponent in the 2020 elections. Certainly, Trump will not forego a golden opportunity like this to improve his chances in the upcoming election and weaken his Democratic opponents; and

6. The capture or killing of al-Baghdadi was a top security priority for Trump for a long time. Now, that goal has been achieved. The person who is happiest with the killing is likely Trump, who sees this as one of the greatest achievements of his presidency. It is ironic that former President Barack Obama followed the same path to win a second term when he succeeded in eliminating Osama bin Laden in 2011 before the 2012 elections. Now, the same thing is happening for Trump.

Was the timing of the bin Laden and al-Baghdadi operations set to coincide with the presidential election season in order to garner support?

It is a truly astonishing question. Yet, in reality, it is tied to U.S. domestic politics. At the same time, that does not undermine the enormous significance of killing both bin Laden and al-Baghdadi, thereby removing them from the battlefield. It is especially important for the countries of the Middle East, which have endured the effects of this extremism on their stability and on their regimes.

As usual, Trump stole the spotlight with al-Baghdadi’s death. Nevertheless, will this ultimately mean a Middle East that is free from war, problems, and disputes?

All indications are that the Middle East region suffers from instability in Yemen, Iraq, Syria, Lebanon and Libya, and it does not seem as though the conditions will change anytime soon, even with news of al-Baghdadi’s death.

The conflict is primarily controlled by the interests of great powers. The other countries in the region revolve around these interests, which change from time to time. Perhaps Trump’s praise of Russia, Turkey, Syria, and Iraq for the successful raid on al-Baghdadi shows that interests determine the status quo in the Middle East and will continue to so for a long time.