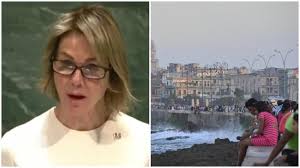 The account was detailed and convincing. Cuban Foreign Minister Bruno Rodríguez Parrilla presented to the United Nations, one by one, examples of human rights violations committed by the United States against its own citizens.

The hypocrisy and double standard with which Washington regards the speck in the eye of another, but denies the huge and heavy light beam in its own eye, was thus unmasked.

Kelly Craft, Donald Trump’s representative to the United Nations, in a highly cynical gesture, did not acknowledge the international community’s appeal to lift the Cuban blockade, even stating that the United States is not responsible for what is happening in Cuba.

With overwhelming arrogance, Craft said, “Like all nations, we get to choose which countries we trade with. This is our sovereign right.” said U.S. Ambassador to the U.N. Craft prior to the vote.

It would be laughable, were it not that she believes it and intends for the world to believe it. Almost certainly, her justification will be the subject of memes on social networks: Our first responsibility is to defend those without a voice. She said this, in the name of an executive who is particularly deaf to very diverse international appeals, especially because for two days in the steel and glass colossus along Manhattan’s East River, one could hear people chanting to lift the blockade; calling it immoral, inhuman, anachronistic and aberrant.

Craft expressed America’s arrogance and showed America’s inability to bring down a nation that remains on its feet and even dreams about present and future development.

Assaulting, attacking and creating wars and all the evils they entail, when the U.S. disregards essential and basic rights to life by other people, and does so pursuant to the U.S. national security policy and its pronounced exceptionality. The substance of international law is not enough for the U.S. There is nothing quite like revealing the huge pile of garbage hiding under a tidy carpet of excellence paraded by the world’s leading nation.

It is generally recognized, even by international organizations, that since Trump was elected, the United States has deteriorated weakened its approach to human rights, with this downturn expressed in countless regulations, executive orders and laws that undermine the life and welfare of its own citizens and many others. It closes borders to thousands of people from almost a dozen countries, and at the same time besieges other nations and imposes sanctions. Thus, in this way it only isolates, confines and cuts itself off from adversaries and even from those who are partners and friends.

To the breakdown of rules regarding coexistence, and to the insult inflicted on international law, one can add the endless list of damage the U.S. is inflicting on its own citizens, which can be summarized as follows: implementation of policies against immigration, policies that work against achieving affordable medical care, policies that fight the development of education, universal exercise of voting rights, racial equality – including equality in how law enforcement performs its job, policies that run counter to children’s rights and efforts to fight poverty and homelessness, as well as efforts to strengthen state police surveillance. That is not to mention an increase in hate crimes, violence, and polarization in the street deployed by Trumpian orders over Twitter. Then there are attacks on the family, the primary unit of any society, in the case of foreigners living within its territory.

In addition, there is the problem of American prisons, populated mainly by ethnic minority inmates, as well as overflowing private prisons that lock up thousands of migrants separated from their families (and which separate children from their mothers and fathers).

It is not only that the data released by the Cuban foreign minister would be chilling for any country, and enough to lead the U.S. State Department to declare humanitarian crisis, to advocate a soft or armed intervention. The most recent reports by an organization similar to Human Rights Watch that it is seriously worried expose a country essentially in a state of emergency.

The worst is that the U.S. has enough wealth to solve all its problems, but its willingness to distribute any of that wealth to provide people with conditions of shared well-being is below zero.

No matter how hard Ambassador Craft tries, she does not have a super vacuum capable of cleaning up all the dirt accumulated by and in the White House.