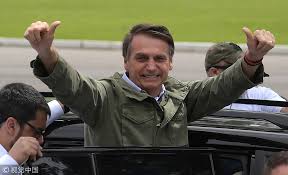 The Brazilian vote against the U.N. resolution condemning the embargo on Cuba is unequivocal confirmation that the Jair Bolsonaro government does not have its own foreign policy

The Brazilian vote against the U.N. resolution condemning the embargo on Cuba is unequivocal confirmation that the Jair Bolsonaro government does not have its own foreign policy, opting instead for automatic alignment with Donald Trump’s White House.

It is a high-risk bet not only because it goes against national interests. After all, our interests are not always confused with Washington’s. Bolsonaro took a risk because Trump may be entering his final year as president. In the end, considering the Democrats’ performance in state and local elections last week, the chances of the Republican facing a fierce battle for reelection in a year have increased.

With Elizabeth Warren, Bernie Sanders or Joe Biden in the White House from 2021, there must be a resumption of the rapprochement between Washington and Havana that began under former President Barack Obama and was interrupted by Trump. Thus, Brazil would be left isolated with Israel regarding the condemnation of the Cuban regime at the U.N., something that neither American allies, like Colombia (which abstained), or governments sympathetic to Trump, like Hungarian Prime Minister Viktor Orban’s, dared to do.

We do not need a government that, like Brazil’s Workers’ Party, financed the construction of an enterprise in Cuba — Port of Mariel — to provide financial benefits to his colleagues, while not benefiting Brazilian exporters. We also do not deserve a head of state that behaves like the U.S. president’s pet lap poodle, nor a sad parody of British Labor Party’s Tony Blair, who earned the same nickname by aligning himself fully with former President George W. Bush’s war policies in the 2000s.

About Lisa Carrington 65 Articles
Lisa is a freelance translator in English, Spanish and Portuguese. She has a BA in Spanish for Translation and Portuguese and is a Member of the Chartered Institute of Linguists. She is passionate about languages, specifically translation.