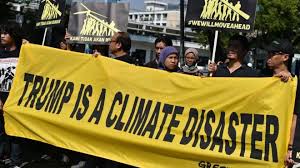 The Paris Agreement can and must be reinforced despite America’s withdrawal.

It came as no surprise when Donald Trump’s United States announced last week that it had officially initiated proceedings to withdraw from the Paris climate agreement. Trump had already indicated his intention to do so in June 2017 when he idiotically declared that he was elected “to represent the citizens of Pittsburgh, not Paris.”

In accordance with the procedures laid out in the agreement, the announcement came three years to the day after the agreement took effect on Nov. 4, 2016. For this confused climate skeptic of a president, the Paris agreement constitutes a “bad deal” for the United States, in keeping with the absurd victim act which he continues to play out in international negotiations. As if the agreement signed in 2015, concerning setting targets for reducing greenhouse gas emissions, were binding, which it is not.

This is not surprising, but it is nonetheless ridiculous, since it is certainly not in the national or collective interest of the United States to pull out of a broad international agreement that, on the contrary, urgently needs to be reinforced.

This withdrawal will not prevent sea levels from rising, including at Mar-a-Lago. Nor will it prevent California from burning, a place the president seems to almost revel in leaving to its fate. This withdrawal will not halt “nature’s violent response,” as Dominic Champagne, spokesperson for Quebec’s “Transition Pact” put it, to the violence of our hyperconsumerist economies.

The only thing this withdrawal has going for it, on a highly political level, is what a president who has given notable support to the dying coal industry hopes to gain, as he counts on it to give him votes and help him get reelected in 2020. Speaking of which, the hope is that Trump wins on Nov. 3 and, as chance would have it, the withdrawal as it stands officially comes into force on Nov. 4, the following day. Let’s hope not.

This is a huge error in view of the migration crisis, which Trump is stirring up for election purposes. Based on figures from the World Bank, the Global Center on Adaptation, a United Nations affiliated body, notes that climate change will inevitably drive more and more people from Central America to flee their countries for the obvious reason that in the “Northern Triangle” (Guatemala, Salvador and Honduras), around half of the population lives off agriculture. Of course, the president latches onto this particular crisis to whip up his base. For a start, this is an administration that simply does not possess an understanding of the measures that are urgently needed to help these poor countries.

Similarly, he makes a mockery of the call, made last week by 11,000 scientists in the American review BioScience, for a revolution in the way we live in order to avoid “indescribable suffering” linked to global warming; and of the recent report relating to the oceans and the cryosphere (ice caps, pack ice, permafrost) by the Intergovernmental Panel on Climate Change, a report that again confirms the pessimistic scenarios which the IPCC has been setting out since 1990, and which are sometimes even surpassed by the reality of a climate crisis that is accelerating faster than expected.

Certainly, for the second largest emitter of greenhouse gases after China to pull out is a massive blow, and not merely symbolic, in the fight against climate change. It does not, however, cancel out the enabling role of the Paris Agreement. In the United States, the “We Are Still In” movement (25 states, 430 cities, hundreds of universities and businesses) stands by the treaty. A treaty that, we must not forget, remains incomplete and insufficient. On a global scale, carbon dioxide continues to be emitted into the atmosphere in increasing quantities.

“Excuse me mister,” in the words of songwriter Ben Harper. All the protests and Greta Thunbergs in the world won’t change Trump or his aficionados’ minds. That may be, says Naomi Klein, author of the new book, “On Fire: The (Burning Case) for a Green New Deal.” Radical change in order to achieve carbon neutrality is nonetheless possible, she urges, convinced that we are seeing a real shift in public opinion. So what now? We must not, in any case, stop pestering the Justin Trudeaus and Emmanuel Macrons of the world and all those politicians who say one thing and do another on the climate and who are fooling us less and less. They are also part of the problem.