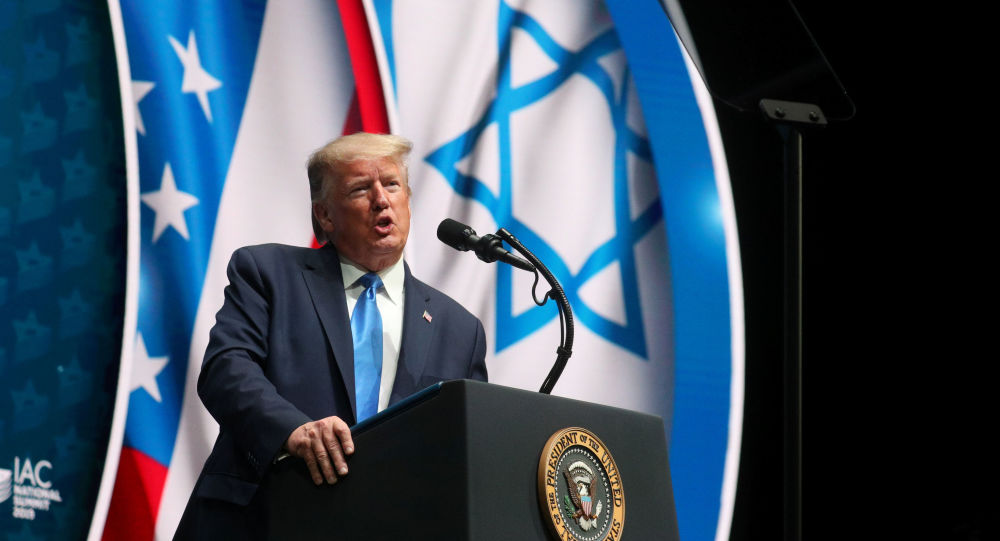 Donald Trump strives for votes from the Jewish Diaspora in his own unique and so primitive a way that his most recent speech again brought about accusations of anti-Semitism.

Continuing his campaign for reelection in the key swing state of Florida, Donald Trump spoke to Jewish voters on Saturday at a meeting of the so-called Israeli-American Council sponsored by billionaire Sheldon Adelson, a Trump supporter.

In August, the president accused Jewish Democrats of showing “ignorance or great disloyalty” toward America. Such an allegation of disloyalty is typical of accusations that have been made by anti-Semites for centuries, especially by fascists in Europe in the 20th century. On Saturday, Trump stated that many Jews in the U.S. “do not love Israel enough.”

Trump’s remarks came in the context of a long list of how much his administration has done for Israel: recognizing Jerusalem as the capital of the state, relocating its embassy there, granting Israel full control over the annexed Golan Heights (although the international community does not recognize Israel’s sovereignty over this territory), declaring Jewish settlements in the occupied Palestinian West Bank as legal (also contrary to the position of the international community and even the legal opinion of the 1978 U.S. Department of State) and annulment of the previous two-state resolution for the Middle East recognizing the existence of Israel and Palestine.

Trump made it clear that the Diaspora’s representatives, who do not support his policy on the Middle East conflict, with its harsh approach toward Palestinians adopted by the current right-wing Likud government, are showing a lack of loyalty to their country of origin.

What Pushes Jews away from Trump

The nearly 6 million-strong community of Jewish Americans is extremely diverse. The majority has supported Democrats for decades. They are mostly left-liberal voters, generally non-religious. The traditional, historically rooted aversion to nationalism and authoritarianism is pushing the Jews away from the Republicans, especially the “America First” movement, which has dominated Trump’s party during his administration. Some people do not really feel a special emotional affinity for Israel; they simply consider themselves Americans. A radical minority of anti-Zionists, for doctrinal reasons, do not recognize the legitimacy of the state of Israel, claiming that Judaism is incompatible with Zionism.

Trump, however, certainly did not mean this last group in his remarks, but rather the left-wing Jews who criticize his policy on the Palestinian conflict as well. According to experts speaking in the latest issue of Foreign Affairs, the “peaceful” Middle East conflict resolution plan prepared by Trump’s son-in-law, Jared Kushner, will exacerbate the conflict which has only been temporarily restrained.

The President Is Criticizing Warren

In his speech, Trump attacked one of the leading candidates for the Democratic presidential nomination, Sen. Elizabeth Warren. Warren proposed a 2% tax on owners of property valued at over $50 million, an additional tax on billionaires, and an increase in taxes on capital gains. Trump falsely suggested that Warren intends to raise taxes by 100%. The president warned his Jewish listeners that if they vote for the senator, they would go bankrupt. He reminded the audience that many of them are property owners or even industrial entrepreneurs.

Trump’s statement, not the first of its kind, was understood as a continuation of the stereotype that Jews are guided only by financial motives, that they vote only for politicians who will let them get rich. This is probably what former President of the National Jewish Democratic Council Aaron Keyak, had in mind when he condemned Trump as anti-Semitic. “Trump’s insistence on using anti-Semitic tropes when addressing Jewish audiences is dangerous and should concern every member of the Jewish community,” he said.

Campaigns by some left-wing Democrats from ethnic and religious minorities who are attacking Israel for its harsh attitude toward the Palestinians are fuel for Trump, who is igniting fear of anti-Semitism on the left. In Florida, the president recalled how American Muslim congresswomen supported the BDS campaign for a boycott and sanctions against Israel, and reminded people about the anti-Israeli speeches by pro-Palestinian students at American universities.

However, he did not say a word about Benjamin Netanyahu, someone he has always declared to be a friend. This was talked about as Trump’s attempt to distance himself from the Israeli prime minister, who has been accused of corruption.