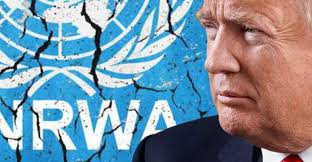 As is always the case, the United States and Israel find themselves on one side, and the rest of the world on the other!

In the wake of the Trump administration’s declaration of war (seconded by Israel, of course) on the U.N. Relief and Works Agency for Palestinian Refugees, the U.N. General Assembly has issued a historic resolution to once again renew the work of the agency for a three-year period. With this renewed commitment from the international community to enforce resolutions on the Palestinian issue comes its renewed opposition to the illegal decisions of the occupying authority and its undermining of the two-state solution.

What was especially remarkable about the U.N. resolution was its overwhelming consensus. Some 169 countries voted yes and nine abstained, leaving no one to stand by America and Israel – not even the mighty Republic of Micronesia!

Despite fierce opposition from the American administration, which naturally stemmed from its position of complete acquiescence to Israel and desire to sabotage any response to the Palestinian issue whatsoever, the resolution’s inevitable passage clearly signified the will of the international community. America’s lonely stand in the General Assembly was preceded by its decision on Jerusalem and then by its attempts to legitimize the existence and expansion of Israeli settlements in the West Bank. On top of withdrawing its financial contributions to UNRWA, the U.S. has issued an all-out assault seeking to abolish the agency which provides basic services to more than 5 million Palestinian refugees.

This December marks the 70th anniversary of the establishment of UNRWA by its founding U.N. resolution, which explicitly linked its existence to a final and lasting solution for the Palestinian issue in accordance with international law. Meanwhile, the Trump administration’s efforts run completely in line with the Israeli campaign to erase the refugee question from any solution, to deny refugees their legally recognized rights, and to claim that the only “refugees” are those who fled extermination at the hands of Zionist gangs in 1948 – paying no regard to their children or grandchildren!

But the nations of the world have issued their final say on the matter: UNRWA remains standing, as does the world’s responsibility to ensure that all rights are returned to their proper owners, and that all refugees can return to their country. Will Washington reconsider its position, or will it double down on its errant path of broken deals?