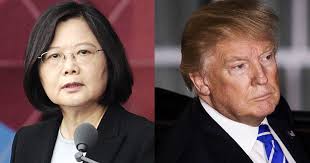 On Dec. 18, President Donald Trump was impeached by a 228-185 vote; however, it’s widely recognized that the impeachment case will be blocked in the Senate and won’t succeed in obtaining a conviction. Taiwan should actually be able to take some things away from this impeachment case. The Taiwanese general election is approaching, and calls for voting a split ticket are deafening. Voters are eager to vent their frustrations with the two parties’ politics, but is split-ticket voting a good way to vote? Let’s let an old democratic country show us what checks and balances are.

Trump was impeached for abusing power and obstructing a congressional investigation, although the Republican-controlled Senate can conduct risk management, and is not likely to allow Trump to be removed from office before the presidential election. But from Trump’s enraged posts criticizing the speaker of the House, it’s clear that he has taken great offense.

Logically, if an impeachment case has no hope of success, there’s no use in initiating one. House Speaker Nancy Pelosi’s party fiercely questioned her about this, but she still insisted on initiating an impeachment investigation. During the investigation process, Trump strongly resisted, refusing to hand over documents, and ordering White House officials not to cooperate with the congressional investigation.

The turbulence of a U.S. impeachment process is, to the public, a brilliant democratic reality show based on the system of checks and balances.

The world over, people complain that two-party systems are useless. When Taiwan voters are asked about their voting plans, many people complain that it doesn’t matter whom you vote for. Is that true? The U.S. midterm elections were the Republicans’ Waterloo, with the Democratic Party retaking control of the House of Representatives, and although they are still the minority in the Senate, the Democrats initiated impeachment, not only leaving a mark on history, but also demonstrating the utility of political parties, telling voters that “although we’re in the minority, we still make the most of our capabilities as the opposition party.” To put it plainly, this is the essence of the checks and balances protection of the two-party system.

Before the election, rather than thinking about their frustrations with certain political parties and calling for split-ticket voting to punish them, Taiwanese voters should consider how to foster effective opposition parties in Taiwan. In 2016, the Democratic Progressive Party gained the majority in the executive and the legislative branches. The party not only has not learned from the experience of that year’s fight for democracy, it even capitalized on its absolute dominance, displaying a complete “my way or the highway” attitude.

Even now, the DPP hasn’t truly dealt with the social opposition stirred up by the pension reform plan. It has continuously treated the Kuomintang as a political ATM. President Tsai Ing-wen’s campaign manager Lin Hsi-yao and Deputy Minister of the Interior Chen Tsong-yen released statements on the uselessness of small parties; besides revealing the party’s self-assurance, the implication is that the DPP is certain that the opposition party has no power.

In the run up to the election, supporters of both the Green and Blue parties are calling for the people to be put first. Do the voters who have taken initiative still need to vent their emotions when voting? Split-ticket voting isn’t the best tactic, and only by showing the people’s strength will Taiwan have true balance of power and be able to resist the dominance of a single party.