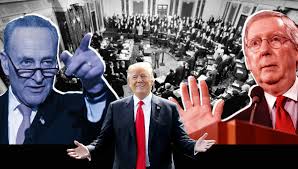 Watergate was a magic word for any journalism student at the end of the 1980s, maybe it still is today. It is, in fact, a magic word for any admirer of American democracy, describing newspapers that were able to expose even the all powerful President Richard Nixon and the presence of a Congress willing to punish him (for spying on the rival party or at least trying to cover up the crime).

Nixon was a Republican with an impressive resume; he even made China a U.S. ally against the Soviets. But when impeachment time came, the Democrats had the support of many Republicans. The honor of the system rose above partisan battles, and, realizing this, Nixon ended up resigning and there was no impeachment vote in 1974.

Any similarity between the Watergate scandal and the current Trump impeachment is, therefore, a mere coincidence. Since the surprise election of the recently turned Republican real estate magnate in 2016, the Democrats have been threatening an impeachment trial. They wagered that they would find something illegal in the association between Russia and the president and his campaign, but that did not work out. Interestingly enough, it was a telephone call, also involving a former Soviet location, to the Ukrainian president to investigate a case involving the son of Democrat Joseph Biden that put Trump in this awkward situation. And I say awkward because it was unlikely to have consequences.

Apart from a far-flung impeachment attempt in the 19th century, Nixon’s case had stood as a symbol of this extreme measure that, just by being possible, dignifies American democracy. It meant that not even a president elected by popular vote is untouchable before the law.

It was actually the Republicans who first trivialized the measure by attempting to remove Bill Clinton from office two decades ago on allegations of perjury during the investigation of a case concerning sex with a White House intern. Of course, the impeachment failed then because it was based more on partisan conflict than on a defense of the Constitution’s values.

No one can claim that Trump does not go too far here and there, confusing maneuvers that were acceptable in the business world with gestures that a president should avoid. But the vote that is now in the House of Representatives, with a few rebellious Democrats and a 100% cohesive Republican Party, promises to affect American democracy more than the president, who is protected by a faithful majority in the Senate, the body that will judge him.

All of this reveals how divided the political class and society itself are one year away from the presidential election. It also shows that whether it is Biden, Elizabeth Warren or Bernie Sanders, the Democrats have little faith that their nominee will be able to defeat Trump based only on debate. Indeed, they victimize Trump, and thus reinforce the support of his base, which, when mobilized, can reelect him.