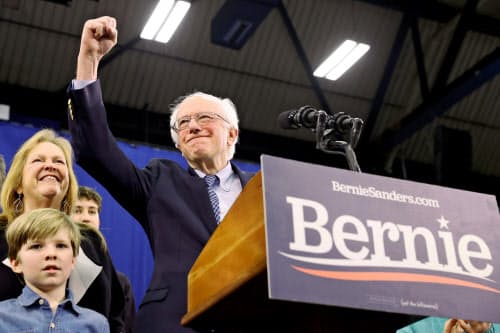 The first two primaries in the increasingly chaotic nomination struggle

There have been unexpected developments since the struggle for the Democratic presidential nomination began 10 days ago in Iowa. While presumed front-runner and former Vice President Joseph Biden dropped in the ranks despite his impressive achievements, 38-year-old rising star Pete Buttigieg and 78-year-old combatant Bernie Sanders split the victory in the first two contests after a bitter fight.

The Democratic Party primaries determine who will face Republican President Donald Trump in America’s November presidential election. There are many previous instances where the number of candidates has narrowed down prior to the New Hampshire primary. Instead, the level of turmoil has only increased.

On Feb. 11, at a voting precinct in Nashua, New Hampshire, a local resident named Elise Rosen, 64, tells me, “I spent a lot of time comparing the four men and women on the left and center, and three hours ago I went for Buttigieg. He’ll protect human rights and seek the truth. I thought he was serious about confronting global warming.”* Free-for-alls reveal this kind of voter confusion.

Ahead of Super Tuesday on March 3, when 14 states will collectively hold Democratic primaries to choose the presidential nominee, the competition will only get fiercer. The popular will can be seen playing out in two different ways.

First, there is the difference in values between the extreme left wing and the moderate forces. On Feb. 10, the day before the vote, Sanders, who has strong support among the young generation, turned his campaign rally into a performance by inviting a famous rock band. Each time he promised to cancel student loan debt or provide universal insurance with sizeable sources of revenue, the hall was enveloped in ripples of cheers. I could feel the fervor of an audience similar to those at Trump’s rallies.

The left wing’s determined candidates promote policies that tap into the young generation’s rage, while the centrists appeal to the sympathies of Republicans and independents. The gap continues to expand. The question arises as to whether the Democrats can preserve their unity even after a candidate is chosen.

The other way the popular will is playing out is that support is scattering among the moderate candidates, too.

Amy Klobuchar, a moderate female candidate, broke into the competition between Buttigieg and Sanders. Many of those who came to vote said that they chose her after witnessing her dignified debate performance on Feb. 7. She is being evaluated as the “sensible candidate” for her humanity, tolerance and accomplishments as a senator.

Support is also steadily building for Michael Bloomberg, a billionaire who is betting on the March collective primary day and who also projects a sense of stability. “Bloomberg’s name wasn’t on the ballot, so I went with another candidate.” I heard this a lot.

“We’ll win in Nevada and South Carolina.”* On the afternoon of the New Hampshire primary, Biden moved on to the southern state of South Carolina, where black votes are fundamental and where he is counting on a victory. The left-leaning Elizabeth Warren, who also fought a tough battle, shouted to her supporters, “We are just getting started!”

“Wouldn’t a big story be that I got more New Hampshire Primary Votes than any incumbent president, in either party, in the history of that Great State?” Trump tweeted. On Twitter, Trump showed off his high vote share in the Republican primary held concurrently with the Democratic one, as if he were merely an idle spectator.

There is unity around defeating Trump, but the candidates’ ideals and policies do not line up. Although the continuation of such a bitter contest will attract attention, the narrowing down of candidates who will not face the general election is late in coming. The U.S. Democratic Party is in a vexing position.

*Translator’s note: These quotes, while accurately translated, cannot be verified.