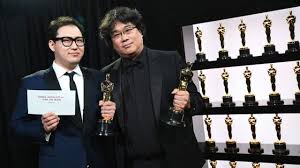 The Academy Awards has a culture that is so exclusive and closed off that director Bong Joon-Ho joked that it was a local film festival. Director Bong was able to present a very Korean and yet universal message in a perfect movie on a stage that was once a festival for Hollywood and white people. The movie that overcame the 1-inch barrier of subtitles to shake the global film industry has also finally torn down the tall walls of the Academy Awards.

“Parasite” is about the gap. It described the process of a poor family trying to climb the rungs of a rich family and falling back down into the basement. The image of a life that naturally allows for the parasitic life of the rich describes the reality of breaking the ladder of class mobility, and through telling a story that says rich families and poor families can’t be divided into good and evil, suggests that the class conflict we are suffering from is a community problem that is bigger than simple right vs. wrong. From Cannes to the Academy, many foreigners that saw this movie said it was like a story about their own countries. Neoliberalism and the regulation it has birthed has led to polarization, a problem that is shared all over the world. The fact that the story with which those foreigners all sympathize came from Korea shows just how strong the divisions between classes are. In an interview, Bong said that “Parasite” is “a movie about the courtesy and dignity of the mankind.” “Parasite” showed that we are at a turning point, after which one side may become a parasite to the other, like the movie’s title, or that both sides may coexist, and that the empathy and courtesy which people show to others will decide the direction we take.

The Academy Awards provided the stage that showed how this message can be embodied in person. The Academy acknowledged and embraced the need for diversity, breaking free of the mentality that has divided Hollywood movies into those that are mainstream and those others that are for outsiders. It transformed the category of best foreign language film to the more inclusive category of best international feature, and, using its existing criteria, chose a completely un-mainstream Korean movie as best picture. Because the Academy paid its respects to the movie, critics and the media gushed in their evaluation that the Academy has finally thrown off the reputation that it was a narrow-minded film festival. The fact that it was another chance to think about the message of “Parasite” makes its success at the Academy that much more heartening.